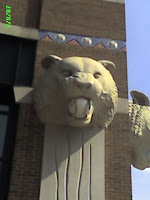 Cause it's a sweep!!! Red Sox Nation rolled into the "D" this weekend and left as losers of 3 straight. How much was it again, just to talk to Dice-K?

As a young boy, I grew up watching the Red Sox, since I lived in the littlest state in the union, but since moving out here in 1985 with my dad, i have since become a Tigers fan. I never made it to the vaunted Fenway Paark and about the only things i miss about the east coast are Dell's and clam cakes and chowder!

Making it our annual tradition, my dad and i enjoyed a wicked blast of summer heat and a scintilating game by the Tigers, sparked by Curtis Granderson's web gem, as they capped the first half of the 2007 season. GO TIGERS!!!
Posted by Unknown at 8:56 PM