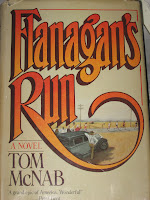 Based loosely on the 1929 Bunion Derby, Flanagan's Run is a sweeping saga of the depths the human mind and body face as individuals race from L.A. to N.Y. in an attempt to win $$$ during the Great Depression.

I found this book last year laying in the book swap section of the gym library at the RIU hotel in Playa Del Carmen, Mexico and read it within a matter of days and again during the summer as a prepared for my then ill fated, failed 50 miler. As I read it i thought, man, how can i complain about running 50 miles in 1 day, when these individuals are running 50 miles, day in and day out for months at a time?

In the midst again of preparing for another 50 miler, I pulled it down from my shelf in the closet and began reading it again last week. The likes of Doc Cole, Mike Morgan, and Kate Sheridan all make my struggles to get miles in seem paltry at best even if it only fiction. Never mind, the real life account of winner Andy Payne in the 1929 Bunion Derby.

Only a couple of days later, Runner's World appeared on my porch with low and behold, an article on the 1929 Bunion Derby.

Not sure what the message is in all of it except that I should have no complaints about getting out there and putting in the miles in preparation. So get out there and run, RUN!
Posted by Unknown at 3:21 PM