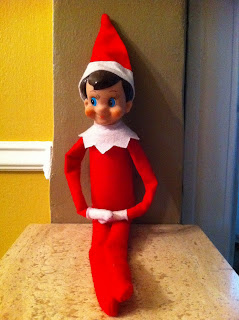 I received a frantic phone call and text message yesterday from the wife stating, "Where is A......? The kids can't find him and they are freaking out." A...... , and no it is not short for a..hole, even though I think that might be appropriate sometimes, is that freaking Elf on a Shelf.

This guy, who I must admit is a sheer stroke of marketing genius created in 2005, was brought into our holiday mix last year and cemented himself as part of the tradition when he reappeared this year. I remember last year when the wife brought him home, because she had read about this guy and thought it would be fun. The problem this year however, was when we brought him out was that none of us, the kids, the wife, or I could remember A......'s name. Of course, at the back of the accompanying book that comes this guy there is a space for you to write this guy's name. We didn't do that. Therefore, this year, when I read the book to the kids, we renamed him A....... As of this writing, I still haven't put A...... name in the book.

Now, I am not going to lie, I use A....... as a manipulative piece of psychology with my kids. Being that they are 4 and 7 and still believe in Santa Clause, they believe that this guy genuinely reports to Santa himself. They believe A...... takes notes and tells Santa what they have been doing over the last day. I have even used A..... when they start to wind themselves up and say, "You know, A...... is watching and will be talking with Santa last night." That is usually enough to quiet the crowd to at least a dull roar. Furthermore, the children think he is kind of cute, even though I think he eerily reminds me of those hand puppets from Mr. Rogers Neighborhood. Despite the pros of having this guy around the house, the cons tip the scales and make me think that A....would sometimes be best served by finding a snow bank to permanentely make his home.

Obviously, this guy doesn't magically transport himself anywhere at anytime. On my better days, I remember to place A..... in some new spot before heading to bed. Sometimes I think I need to generate an excel spreadsheet to reference nightly as to where the little A...... has been. Mornings where I have forgotten where the little A.... has been and my mind is fuzzy from a wee bit to much egg nog, I tip toe around trying to place the little A...... in a new spot. It is a constant source of worry in making sure he has been moved from his "magical" trip to the North Pole.

So in the end, this guy will be sticking around for now. It would be cruel of me to tell him to pack up his candy cane suitcase and hit the North Pole expressway in the midst of the holiday season. This guy has got me by the nutcracker.
Posted by Unknown at 10:36 AM