A change in season 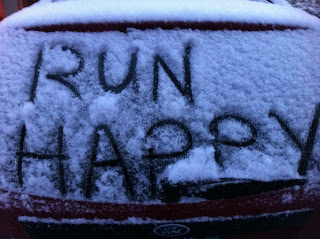 No other season says "I"m here! Look at me!" more boastfully than winter. As you go into any other season, it is difficult sometimes to see where winter melts into spring or spring boils into summer because it is usually done at such a slow pace that you just naturally accept that a new season is here. Not winter.

Oh winter might send out a few feelers where a couple of days might have you put that hat on or pull the zipper up all the way on your coat but that’s it. However, it sends a clear “HELLO” when it drops snow on the ground. You now ole man winter is ready to settle in for a few months. Now, as a midwesterner, I really don’t count the first snow where it sticks only to the grass and cars and then is gone by mid morning. Nope, the first time I really can say winter is here is when it sticks to to road and I can make tracks while running.

So there I was was yesterday, looking out my window and giddy at the thought of heading out in the darkness of the early morning and getting a chance to make first tracks when I saw everything covered in snow. There is something special to heading out the door and making first tracks even if it is on snow covered streets. Now, ask me about enjoying winter running again in a couple months and I may have a different opinion. Upon my return home after eight miles of crunching powder underneath running in a snow globe atmosphere, I saw the the inscription on my car. Was it ole man winter telling me how to best enjoy this new season?
Posted by Unknown at 11:37 AM

Beautiful post! Making the first tracks in the snow is the greatest! I'm going to add you to my running links page. Care to do the same with my blog? - www.michael-selmer.com/blog