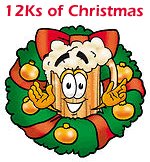 Sometimes the best organized events are those without an entry fee. Take for instance the 12K's of Xmas that I participated in last night. Organized by a friend of mine Kevin, who runs the website Just Finish (www.justfinish.com), this was a "fun run" event meant to celebrate the holidays. The opportunity existed to either run, walk, or man the tables and pass out the food and drink at the end of each loop.

The out and back 1km loop was run on an residential street and people were quite festive in their wear. Some sported tree skits, holiday socks, and even Santa made an appearance: 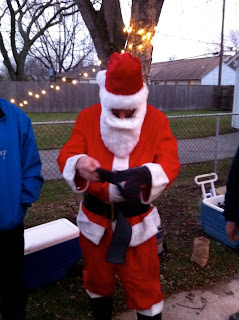 Me, I stuck with my standard Santa Socks, and newly acquired Grandma sweatshirt and Elf Hat. 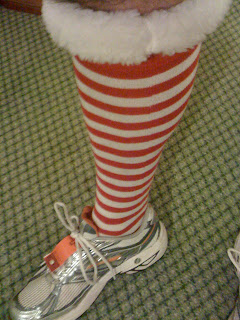 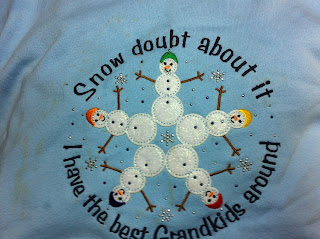 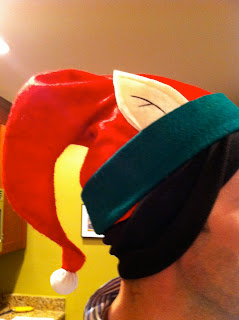 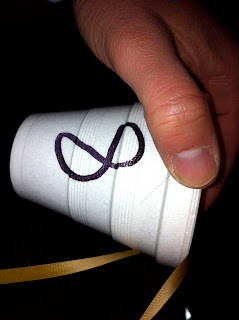 Here is the menu:

There had been some gentle ribbing amongst several of us as to who might "win" the event. At stake was an artfully crafted Christmas Tree belt buckle made out of cardboard. Santa said "Go" and we sprinted off.... With my elf hat flying I quickly realized that we were scampering at a 7:30ish pace and that I wasn't going to be able to maintain that given the food and drink that I needed to ingest.

I will not lie. I was quite concerned that at some point given that I had to run between each K, that there was a likelihood that I would be making my own special concoction that would fly like a sleigh. However, that was not the case, and I ran, walked and had a chance to catch up with some people all the while ingesting the yummy treats laid out. Managed to finish in second place which in reality meant nothing other than I got to stop and eat pizza and drink beer. A great event that I hope to fold into the already busy holiday season.
Posted by Unknown at 4:58 PM

But who won? LOL

I recently stumbled on your blog. I have socks like that!! I also have a string of battery operated christmas lights (meant for a wreath) that I wrap around myself for silly holiday events! The sweatshirt is great; you really get into the spirit of such events!!