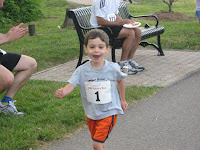 After convincingly dispatching of Twinkle Toes earlier in the week, little dirt dawg set his sights on conquering the world of running at the Solstice Run which featured a 1/4 mile kids run, 10k and 5k run/walk.

With his race # secured and a proper warmup which included the butt dance and some windsprints with the jogger, 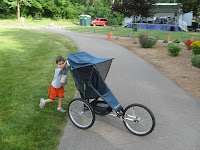 little dirt dawg toed the line with other hopefuls who all mysteriously as he reported also sported the #1.

Crewing the race, Dirrty Girl reported that little dirt dawg ran just like his dad, slow and steady and enjoyed his time out there. After finishing first, little dirt dawg captured his medal 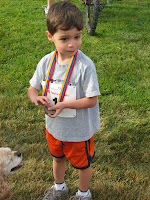 and hopped into the jogger for the 5k with me.

Starting in the very back with the other joggers, I was spurred onby little dirt dawg's cries of "faster daddy" and we began to carve up the course like a NASCAR driver on a road course. Speeding through the 5k in time of 22:46, little dirt dawg and I won the unofficial baby jogger category. 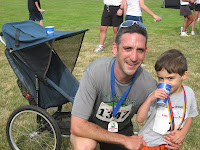 In the post race interview, little dirt dawg was asked if he would like to do another race with daddy, where he promptly replied, " No, with mommy!" Look for Dirrty Girl and little dirt dawg to tear it up at a race this summer.
Posted by Unknown at 11:29 AM

Congrats on a double victory! Since Lance has demonstarted talent in both running and cycling this week perhaps he should consider racing some duathalons or perhaps a tri? How is he in the water?

That was hilarious. I cover most my miles with my 1 year old son, but we have yet to try a race. Good luck with the North Country Trail Run training!