Fresh off of his Lumberjack 100, Twinkle Toes faced his toughest race so far this year when little dirt dawg challenged him to the "Around the Block and Read House Numbers Sidewalk Race" held this evening. The course measuring .32 miles provided numerous challenges including undulating terrain on the city sidewalks and plenty of stopping and starting as the contestants had to read the numbers off of each house as they passed. At the start, it looked like Twinkle Toes would blow the doors off of little dirt dawg in his full team kit and roaring red bike. 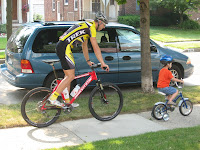 However, perhaps following in his father's footsteps, little dirt dawg started slow and kept it at an even enough pace that he could roll easily by and read house numbers. Twinkle Toes, not wanting to incur any penalties was forced to match the effort of the wily youngster. 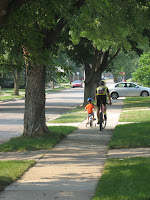 Coming into the homestretch, little dirt dawg hung on and forced Twinkle Toes to watch him roll across the line in victory 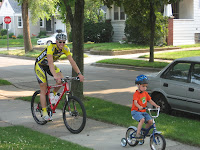 After the race, little dirt dawg was proud to say that he could hang with the big boys. 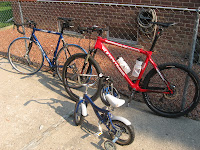 Not fair! I got boxed in and had to follow the "no going on the grass" rule. I think I probably should of taken the inside on the final turn instead of the outside. Little Dirt Dawg holds a tough line and is not afraid to throw an elbow or two! Potentially the next Boonen?