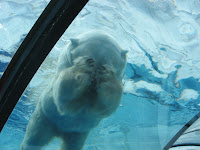 One advantage of living in our tiny, overpriced bungalow in Royal Oak, is that the Detroit Zoo is a mere 5 minutes away. Given the oppresive heat the last couple of days the whole family was getting a little "cabin fever" and was in need of a break when Dirrty Girl proposed the zoo after dinner.

With a yearly membership, it is quick and easy to get to and in the zoo to see the animals. Sometimes little dirt dawg would just like to see the Polar Bears housed in the world's largest polar bear exhibit opened to the public, but tonight he was more interested in the newly opened Giraffe Encounter, which allows for feeding of special treats to the giraffes at practically their "eye level".

Evenings at the zoo is really the best time to see the animals. The heat of the has passed and the animals are definetely feeling a little more frisky. 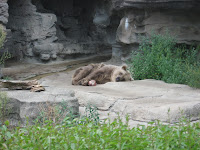