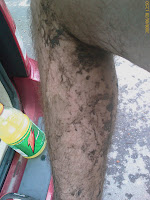 The deluge that greeted me as I left the abode this morning was merely a blip on the radar I told myself as I made my way to LakeShore Park to run with Five Fingers. I was feeling really good after D.D.M.C. #6 and Five Fingers and I decided to run an easy 10 on the trail.

Good thing. The trails were a sloppy, muddy, squishy mess....but man was it fun!! Speed was not the order of business unless it was to get away from the squitos...which I think today had a hankering for Five Finger's Mutt Blood as they encircled him throughout the course. Neither of our Garmins (305 or 405) could maintain a signal very well so we just bounded along and had the entire trail to ourselves until we ended up back in the parking lot looking like a couple of kids who had thrown mud at each other all day in the sandbox!!

The only way to top off a great trail run was to head to Zumba's for some chicken taco's....MMMM
Posted by Unknown at 3:54 PM

Thanks for not mentioning my embarrassing wipe out on that slippery downhill.

Looking forward to Island Lake. Have fun in PA.

Five Fingers' bruises from your run are gnarly!!

Too bad I couldn't join. I was off getting girly products for FF's sister's wedding this weekend.

Maybe next time. I just can't run with either of you. Not only am I slow, but I'm short as heck (about a foot shorter than you)! I can't keep up with ya.

Got any recommendations for trails up near Leland? That's where the wedding is this weekend.