Dirrty Feather was out this week, and Little Dirt Dawg was in as the Summer Solstice Run in Northville took place today. Dirrty Girl said she couldn't push either one for the duration of the 10k, so that left me to push Little Dirt Dawg before the kids run. Well over 3 feet and nearing 40lbs, I think this might be the last season for Little Dirt Dawg in the baby jogger. 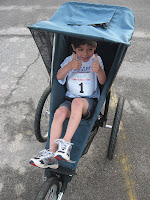 We started near the back, because even though Dirrty Feather was still sound asleep at grandma's, she had left me with a reminder of her. A similar head cold and goobly, gobbly stuffy nose. It was not looking to be a fast day, and Dirrty Girl, who has run a mere handful of times since her 1/2 marathon just wanted to not be the last person. 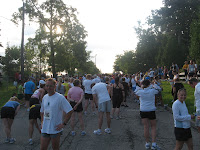 Off went the gun and Little Dirt Dawg and I took off at a reasonable pace. This is where being in the back of the pack is not good; people with headphones who just weave on the road in tune to the music and have no conception of space forcing me to apply the brake several times to not run up their ankles. We managed to squeak out a 7:56 mile including a rather large hill. Pushing a 4 yr and 40lb kid up hills is not conducive to speed.

We got into a groove after that and started rolling: 7:09/7:06/6:56/6:53/6:51. Little Dirt Dawg would spot the mile markers and then tell me how many more miles to go. He also reported that he did not like the water served at the aid stations. In any event, as we rolled down the hill into the final .2, I started sprinting with Little Dirt Dawg and we managed to catch a few people. With a clear shot to the finish line, I hear labored breathing and footsteps behind me. I didn't turn around, but put my head down and ran faster, pushing Little Dirt Dawg to near uncontrollable speeds to finish in 44:08 (Timex Time). A tie for 5th place in the 30-34 division with the labored breathing, footstep pounding guy @ the finish. 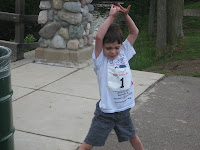 Little Dirt Dawg lined up near the back, and once the race began broke into his easy going loping style taking in the sights and sounds of the park as he traversed the course. 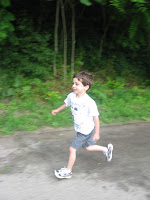 With medal in hand from his race, Little Dirt Dawg and I were able to locate Dirrty Girl, and he raced with her to a 1 hr and 6 min finish. 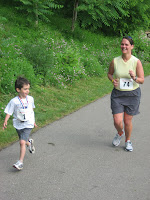 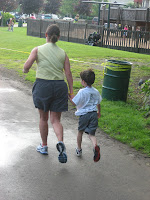 Not a bad way to start summer vacation!

Oh my god, that is so cute! Mum and son running hand in hand to the finish!

I'm not one for placing yet, but maybe someday I will be able to. Right now my goals are much like Dirrty Girl's: no DFL'ing.