Run Drugs Out of Town 10k

Today, Dirrty Feather and I ventured out to participate in the Run Out of Town 10K put on by Just Say Run. The group has a noble, two folded purpose: Raise awarness against teen drug use and to raise $ for the Livionia Save Our Youth Task Force. 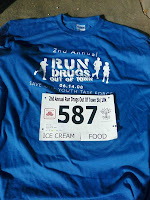 I attempted to talk with Dirrty Feather about our race plans for today's event, but she instead decided to catch a quick nap prior to the start. 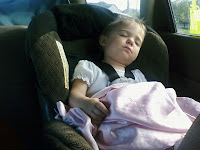 Held on Hines Drive, the race was an out an back course and the races consisted of a 1 mile walk, 5k run/walk, and a 10k run/walk. I commandered our steed near the front when the race director stated that all baby joggers and walkers must move to the back. Not a chance, I said to myself. If I was going to be even mildly competitive today, I was not going to weave in and out of traffic to get near the front. He went on to say that you will get the same time because you are all wearing a timing chip. And then the gun went off.

Mile 1 was covered in a spry 6:39 and there was not a whole lot of traffic in front of us. A few comments of "way to go" and "I wish I could run like that with someone pushing me" were the norm but we seemed to be moving up. Nearing the turnaround for the 5k participants, the crowd really thinned out for those covering the 10K. Mile 2 was covered in 7:01.

We had the road pretty much all to ourselves, so i was able to push Dirrty Feather up a bit, run and then push again. As we got closer to Mile 3 which was covered in 7:08 and the turnaround, I started counting from the leaders on back. Now, this was supposed to be a fun run with my daughter, but I gotta admit I thought I was right up there. The leaders had made the turn and as I started to count back to me, I was in 6th! Holy crap.

No doubt that gave me a bit of a surge as we covered Mile 4 in 6:56. I started thinking with a bit more effort and maybe longer pushes to Dirrty Feather we could catch 5th place. Mile 5 though showed a time of 7:07 as I had to stop at the aid station to dump some water over my head.


However, I marked the 5th place guy and slowly but surely we seemed to reel him in. Passing the 5k marker for the turnaround we ran into most of the walkers for that event and so began a zigzagging effort as no matter how many times I yelled "On your left" there was no movement. Maybe because of the crowds we were able to sneak up on the guy in 5th place but we passed him and covered Mile 6 in 6:41.

With the finish line in sight, I glanced back over my shoulder to see the guy making an effort to catch us, but this was our day and Dirrty Girl and I finished with a time of 43:08 good enough for 5th overall and 1st place in the men's 30-34 age group. I went up to the sullen lad after the race and told him good job. He commented that he was embarrassed that he had just got beaten by a guy with a baby stroller.


Post race refreshments included Jimmy John's and Stucchi's ice cream which made up for the almost 2 hr delay for the awards ceremony. However, due to our high placing, I thought Dirrty Feather should experience the award which she did. 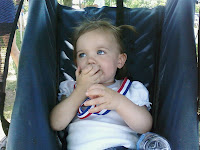 Awesome story. I think he'd feel better about being beaten by a 'guy with a stroller' if he knew about your training regimen. Happy father's day.

That's awesome. I am a fan of the baby stroller training.