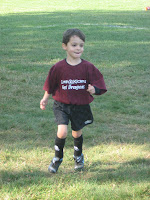 Having missed little dirt dawg's game last week for my 50 miler, I was making darn sure I didn't miss this weekend's edition of squirt ball. Apparently last weekend, his team the Red Dragons (in maroon shirts) stung the Bumblebees who were unable to field a full 3 person team.

This weekend was different. Facing the Little Rascals who had a full complement of players, I somehow got roped into being the timekeeper since i was the only one with a stopwatch (go figure). The rules told to me were: four 8 minute quarters with substitutions halfway through each quarter, 2 minutes in btwn each quarter, and then a 5 minute halftime. Dilligently, I set my watch.

Having some resemblance of time kept squirt ball chaos to a minimum. There was a steady flow of substitutions well before and after the proposed times as parents cajoled, begged and bribed their kids to get out there, or took them for potty breaks, or held them on the sidelines and dried their eyes after falling down or after scoring a goal.

In the end, the Red Dragons emerged victorious even if nobody was really keeping score and feasted on chewy bars and capri suns. This is what play should be all about.
Posted by Unknown at 8:06 PM

Did the Little Rascals attempt to confuse the Red Dragons by allowing Alfalfa to sing the National Anthem before the game? Man, I hated when that dude sang. I can't believe his "Gang" is still around and kickin'

The little rascals mode of trickery was to wear the "red" shirts the Red Dragons were supposed to have and not the maroon issued ones. Thereby by fooling red dragons into passing the ball to like colored little rascals.