As I go into my last few days before Burning River, and my stomach fluctuates between outright bouts of butterflies and then a peaceful calm, I have been planning, replanning, and planning again the logistics of not only my fueling strategy but the use of my CREW. At the beginning of this journey, Dirrty Girl was a bit hesitant and questioned who would want to go down and be part of my CREW for my inagural 100 miler attempt. She had a point. Who would want to selflessly devote themselves for an entire weekend to the needs of a stinky, weary ultrarunner as he seeks to run his first 100 miler? Honestly, I didn't know, but firmly believed that some people would want to come along on this journey. I couldn't offer much outside of a hotel room, a long day on the road, eating out of a cooler, telling a runner that even though he looks like poo to keep moving forward, and that in the end DNF or not (and it will be a NOT) that it would be an adventure. Amazingly, over the course of my training, a few peeps have stepped up and made the commitment. Not sure if it is overkill, to bring this large of a CREW down, I am a newbie of course, but I wouldn't have it any other way. 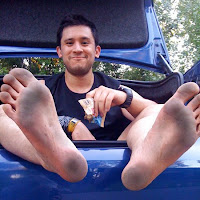 I, first met Nate last summer for some trail running and he introduced me to barefoot running and those Vibram Five Fingers. His ambitions last year were to run an ultra, but an injury derailed his plans. Listening to his body, he has made his way back, and he looked awfully strong the other night on a trail run, bombing most of it barefoot. As it stands right now, Nate will be running Sections M and N1 (Happy Days to Covered Bridge), miles 70 - 81.6, with me. 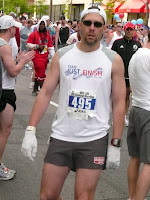 A through hiker of the Appalachian Trail, henceforth the name Skywalker, Kevin is the owner of the Just Finish website and a soon to be ultra runner at Dances with Dirt. We met @ the Martian Marathon earlier this year and have run several times since. Kind enough to slow down to run ramble with me but crazy enough to meet me @ 2 am for a training run and to fly through trails, Kevin will be pacing me the last 20 miles of the course. Run, Walk, or Crawl!! 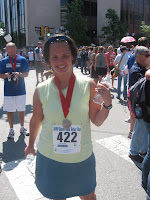 From my first day as a student teacher to today being 7 years of marital bliss, Dirrty Girl has been around for my journey from a pudgy,plodding marathoner to a slightly smaller, slow ultramarathoner. She has endured the early morning ramblings, the goofy podcast and is my rock. I have told her that I will look vastly different physically and mentally along the course, but barring a serious injury that she needs to tell me to keep moving forward. Fittingly, she will run with me at the first pacer pick up @ Boston Store to Pine Lane

I cannot express going into this journey what it means to have people who are willing to be so giving of themselves in helping me to achieve my goal. I say this now, because come race day, my mind may not be of full faculty.

Thanks CREW
Posted by Unknown at 7:57 AM

You are all set with a great crew, well trained and ready to go!

Look solid, the hay's in the barn now, time to cross the start and finish lines!

I don't think three peeps is overkill for a 100miler! You are going to crush it out there. Make the best of the rest of your taper, and GOOD LUCK!! -Megan

Looks like you are all set. Wanted to wish you luck this weekend and hope everything goes well. Can't wait to hear all about it!