The deal brokered with Dirrty Girl for 08, was that in order for me to do the D.D.M.C. that I had to promise to do a couple of things. One, help her establish a training program to enable her to run a 1/2 marathon and two, run with her during that race and whatever training races we were able to do. Today under ideal early spring conditions was the Martian 10k. Trying her best to get in the runs I prescribed, Dirrty Girl felt that she could blaze the course in about one hour. Secretly, I thought she could dip under that.

Dirrty Girl met with the race director before the race and was ensured that if I did stray to far away that the homing ray would paralyze me until she caught up. 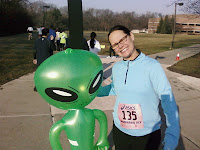 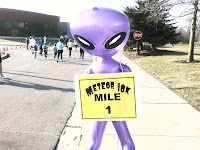 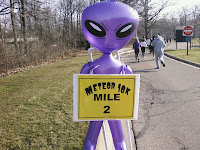 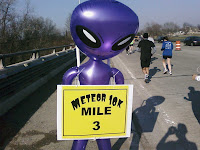 Mile 3 was covered in 10 minutes flat. Dirrty Girl commented to another pair of earthlings who passed stating that they would use her as a pacing guide responded with, "You know the tortoise and the hare? I will be the one with the shell." 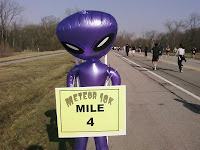 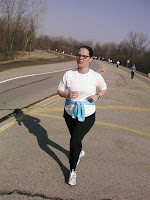 Dirrty Girl, in the zone. 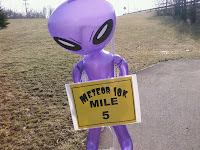 The talk with God must have worked because she responded with a 9:31 for mile 5. 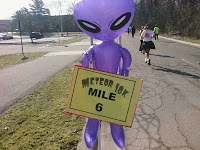 Mile 6 included a decent hill, and Dirrty Girl began feeling the effects of her effort with "my stomach hurts" and " i think i am gonna throw up". I told her that she wasn't and it was just a sign that she was working hard.

Crossing the line in 1 hr and 25 seconds, Dirrty Girl established a new PR. Walking back to the car, plans were already being discussed about preparations for the the 1/2 marathon that are a mere 8 weeks away.

Congrats - you must be proud. Very decent pace for a first race. Mine is working her way up to a 10k right now, and we've brokered a similar deal (where I have to run everything with her).

B.K. (before kids) Dirrty Girl ran the Chicago Marathon. Although she has not plans to run another, she at least wants to be able to run 10K/Half Marathons and Trails....YES...Let's here it for the girl