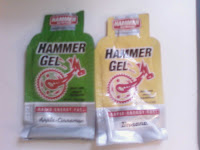 Eating gels on long runs have become as commonplace to me as drinking java, however, I forgot that Dirrty Girl had not had one in quite some time. The goal during today's 10 miler, was for her to practice ingesting one at about 7 miles to see how she would handle it in prep for her upcoming half marathon. I am not sure there is such a thing as gel reflux, but it certainly sounded and looked like what happened as I passed off an Apple Cinnamon gel to Dirrty Girl.
As Dirrty Girl herself put it, "I wasn't quite ready for the consistency of it." Good thing we have another run or two to practice!
Posted by Unknown at 8:05 PM