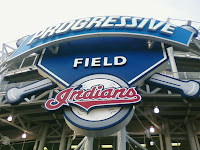 This weekend, I was finally able to cash in my birthday gift of 2 tickets to a Tigers V. Indians game in Cleveland and have my first experience @ Progressive Field. When I first received my tickets in April, I was pretty excited that these tickets in the final week of the regular season could be an important game for either the division title or a wild card berth. Instead, this was an all important game in who sucked worse. After little dirt dawg's soccer game, Dirrty Girl adn I scooted off and met Lightning and Missile for some pre game beers and apps as we toured the city taking in several joints, one of which had a bowling alley in it and some burly men singing a rendition of "Roseanna."

Progressive Field, which used to be known as "The Jake" is a really neat ballpark. Good food, a plethora of beer and great seats made the Tigers blowing another game nearly tolerable. However, their mascot, Slider, looked like something that had boils or open sores, and no way in hell would I let my kids near that thing. 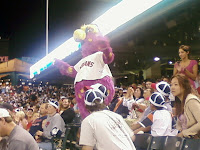 I was not early to rise this morning, but after a few slow miles due to a thick head, dry mouth and rumbly stomach I picked up Lightning and we headed around town to check out some sites includind the Rock N Roll Hall of Fame, The Dawg Pound and what is left of the Flats. 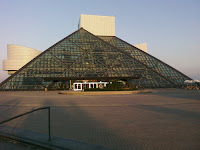 I haven't been to a baseball game at Jacobs Field (since when is it known as "Progressive Field"?) since 1995, I think.

I'm glad you enjoyed your time in my home city of Cleveland. "What's left of the Flats," indeed. Were you ever there back in its heyday in the early-mid 1990s? When I was in college, every visit home involved a trip to the Flats. Oh, how the mighty have fallen! The new "hot spot" is the Ohio City area on the west side.

Sadly I never made it down to the Flats during the heyday..plenty of stories/visuals/scars from friends...