With just a hint of fall in the air, it is time once again for little dirt dawg's soccer league to begin. To my surprise and delight, he stated that he wanted to ride his bike "real fast" to the game. So off he went wearing his shirt from last year as a Red Dragon to make the just about 1 mile ride to the park. 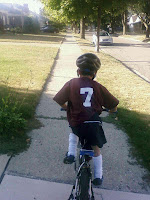 After trading his t-shirt for a sweet jersey, it was time to huddle up with the coach and pick a new team name. Little Dirt Dawg had no problem asserting himself and stating, "that last year we were the red dragons, so this year since our shirts are blue, we should be the blue dragons." With a quick vote, the Blue Dragons were born and Little Dirt Dawg played a great game scoring a couple of goals enroute to a victory, even though no one was really keeping score. 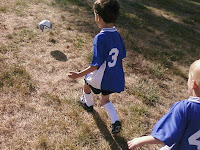 Both Dirrty Girl and I were really impressed with not only his stamina since he continued to run around even during timeouts and halftime wanting to kick the ball around, but that he was into the game and didnt want to really come out. A far cry from last year when it was like pulling teeth to get him engaged and to remain out there. There is some truth to that saying that, "Boy they grow up fast."
Posted by Unknown at 12:52 PM