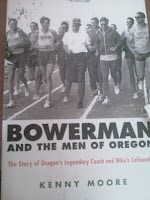 His face adorns the insoles on my multiple pairs of Air Pegasus and I remember him being portrayed by Donald Sutherland in Without Limits as the sage like, waffle sole prototype making track coach, but I did not gain a full appreciaton for the life and accomplishments of Bill Bowermen until reading the biography, Bowerman and the Men of Oregon by Kenny Moore.

Whether it was replacing the venerable Bill Hayward @ Oregon, to being credited with introducing jogging to mainstream America, or being in at the ground level of BRS (Blue Ribbon Sports) before it became Nike, Bill Bowerman was an ecletic man whose ideas and passion for the sport of running still touches and resonates with many of us today. A great read.