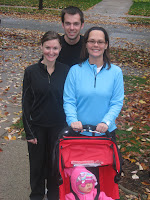 The email had gone out earlier in the week to our friends Missile and Lightning who were coming up to visit that the Fall Fun Frolick would be a premier running event that we would all be participating in this weekend. Lightning thought that this was an "actual" race that had both a 5k run/walk and 5 mile ramble, but Missile knowing better said that this was surely a Dirt Dawg creation.

A damp morning with sprinkles threatened to cancel the Fall Fun Frolick as participants Missile and Dirrty Girl volunteered to go get bagels instead. Lightning said as race director, that I had the final say....do you think I would say no?

With an official starting time of 9:15 am set, participants scrambled to get ready, when Missile almost derailed the entire frolick by forgetting?? her running shoes. Luckily, Dirrty Girl and Missile wear the same size and was able to provide a spare pair.

The run began with much vigor and conversation, before Dirrty Girl, Missile, and Dirrty Feather headed home to complete the 5K Run/Walk and Lightning and I ambled off to finish a 5+ miler.

Post run rewards included bagels and coffee. A good time with good friends.
Posted by Unknown at 10:59 AM