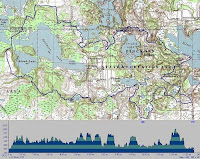 After Friday's Birthday Fun Run to work (18.64 miles), I had a simple goal of just taking today's trail marathon as another training run and make it a nice solid weekend of running. The combined runs over 2 days would come out to just under 45 miles and would give me a good inidicator to how my training was going. In two previous attempts at the trail marathon, I had finished in 5 hours and 4 hr 45 min, but in both cases were left gasping for air and quads crying after the double loop of relentless hills. With an early start at 7 am, I was hoping to get out early and easy and finish stronger than in the past.

With a bit of luck before the early start, I ran into Brian (aka. Lupus Runner and 100 miler stud) and we decided to run the course together. Topics included our plans for Burning River so far, or lack thereof, training, movies (could Over the Top, be the worst movie ever made) and family. Miraculously, even with all the rain that had fallen in the last few days, the trail was in pretty good shape and we managed a 2 hr 32 minute first loop. Gearing up for the second loop, I snagged a couple of chocolate chip cookies and we cut the chit chat to a minimum and put the hammer down so to speak. I  had come to finish strong, and the trail wasn't going down without a fight. Without the rain, steadily rising temps and surprisingly hungry mosquitos threatened to derail the goal. However, I firmly believe in feeding off of other's energy and both Brian and I cruised to a 4 hr 57 minute finish.

I am feeling really good about my 100 miler training at this point. :)

I was at the race venue yesterday shortly after noon to soak my tired legs in the water and snag some free leftover muffins. My planned 22 miles didn't go very well and I was very tired, hot, and disgruntled. Once again I think we just barely missed crossing paths!

Just listened to episode 11 today on my 11 miler (seemed like fate) after hearing about it from Kevin Green on his twitter.

Anyhoo- great job! on the race and the podcast. It was like you were there running with me, which helped keep me going! I am going to listen to the first 10 as I continue to train, I want to save them for actual running, but I hear 10 is hilarious so I might have to sneak that one in tomorrow during my bike ride to school.

awesome job, I was worried about the rising temps for you and your fellow trail runners! oh, sweet socks! keep up the great work and you'll get that 100M.

finally, over the top is an awesome movie.

That's it. I'm going to put a copy of "Over the Top" on my Zen so that we can watch it during Burning River.