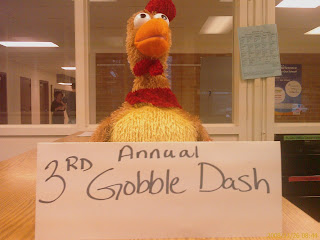 What better way to start the holiday season then an easy stroll along the bike path adjourning the school. Let's face it, most of us are going to stuff ourselves in pure gluttony on Turkey Day and be well on our way to putting on a few extra pounds of stuffing in preparation for the winter. Therefore, I encourage you, to get out and burn a few calories the day before. For every mile you cover, approximately 100 calories are burned.

GET THE POINT.....Participants will be given the secret code word which will allow for the opportunity to gather for some post consumption of barley and hops.

With attendance doubling from last year, six participants (Dirt Dawg, Twinkle Toes, Smokin Joe Frazier, J-No, Chai Tea Latte, and ? (so many names to choose, I will have to think on it) ) engaged in a little pre holiday calorie burning after the students left to begin Thanksgiving break. The weather turned out to be a bit brisk with temps hovering around 36 degrees and wind chill reading of 28, but far better than the deluge that greeted participants last year. Smokin Joe Frazier was the first to turn in his entry form meant more to actually just get people to participate than to be filled out and decided to skip running with Dirt Dawg and Twinkle Toes in lieu of walking with the J-No, Chai Tea Latte, and Cougar? Chai Tea Latte remained confused and asked if she was to fill out the entry form because she has never actually raced before…while Pam of Dundler Mifflin triumphantly returned to the office, stating “that’s right, who just shaved 4 minutes off the time?” When Dirt Dawg told her does that mean you got it down to 42 minutes, she responded “No, 48. They did it in 52 last week.” He did not want to be the one to tell her that 47 and change is the course record for the W.I.P’s. There is always next year….Dorothy Boyd…

The secret code word was passed out to participants, and those that partook enjoyed eating and drinking what they had just burned.

Another year, another Gobble Dash…