They lay there, clean, white and unscuffed. Ready to run. 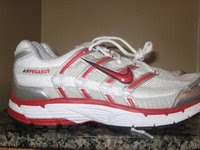 Hungry to release the pent up energy residing in their BRS 1000 soles. And so it began.

Daily, they would join me on runs over varying distances and terrains providing a plush ride and support for my narrow, high arched foot. They never complained, never said no. With quiet determination and selflessness, they happily ran along as a shorter run turned into something longer, or an easy run turned into a barn burner, at least by my standards. They developed character.

Inevitably, as time wore on, they no longer remained clean and unscuffed, replaced instead by the grime and grit of the open road. The plush ride began to damper and my body responded with a few little tweaks to let me know it might be time. A quick check of the mileage, let me know that indeed the miracle plateau had been reached and it was time to say goodbye.

My normal routine was to utilize the retired shoes as kick arounds and then donate them our local church or Goodwill. However, these shoes had a passion for running, I still felt they had some miles left in them. I wanted them to have a second chance.

It was only right, that I would find the home from which these shoes were born would be engaged in the Nike Reuse-a-Shoe Program. Donated shoes are turned into what is known as Nike Grind and used in sports surfaces around the world. Perfect.