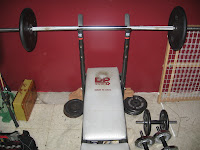 I am a wimp
. Let's just put it out there. Sure, I can run for miles on end and endure hours of sustained discomfort, but ask me to drop and give you twenty, and I am more likely to ask you if you would like that in small bills.
Like most runners, I have avoided any strength training like you do any sick family member before a marathon and could think of a million reasons as to why it is not good for you. I don't want to bulk up, it might slow me down, that's less time I have to run, and so on.
However, earlier this summer as I was going out for a late night run, I noticed this barbaric torture device sitting out on the curb. Suddenly, a crazy and some might call stupid thought, entered my head. The little voice inside said, "Go get your van and bogart this crude and archaic device, put it in your man cave and when the weather turns dark early, lift those plates and become a wimp no more." Stupidly, I did just that, and there it sat all summer long, used more as a place to lay my running gear than to pump myself up.
Sadly, this morning, instead of a tempo run, or hill repeats, or intervals, it was replaced by words that just hurt to say them: Squats, Pushups, Bench Press, Arm Curls, Shoulder Presses, Upright Rows and so on. Oddly, I felt a different rush when I had completed this circuit of torture, but I am going with the idea that if I actually followed a plan all summer long and it produced a 50 miler and new PR in the marathon, that surely this will improve my running somehow, right?
Posted by Unknown at 8:08 PM

I incorporated strength training into my half marathon training schedule and while its effects on my performance are dubious (not enough to be noticeable?) its effects on my arms are unmistakable. I now have an extremely buff upper body, but who knows if it did me any good. But hey, look, biceps! *flex*