Running with the Kenyans 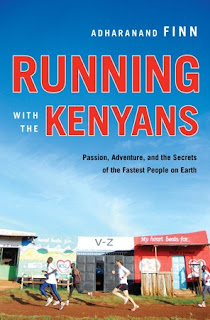 If you had the opportunity to pack up and move to Kenya in an attempt to "unlock" the secrets of the runners who live there, would you? Could moving there and having the ability to train with the best on a daily basis make you that much better? Author and runner, Adharanand Finn, writes about just that experience in his book, Running with the Kenyans.

After winning a local 10k in England, Finn's competitive desires are awakened and with the blessing of his wife, they pack up their three children to head towards the Rift Valley to the town of Iten in the province of Kenya, home to what many view is a mecca of long distance runners. The book follows Finn over the course of a year as he lives, trains, and learns from some of the best runners in the world.

Here are some of the ideas I took away from the book:

1.  In Kenya, there are only athletes.
If you are not an elite athlete or trying to become one, then you do not run. There are no Team in Training, or fun running groups. You run in Kenya to make it to the world stage and win. Winning means $. $ means bringing that back to your community and family to help build a house, school, or purchase livestock. There is no running say a marathon to cross something off your bucket list.

2. Kenyans don't spend a lot of time analyzing their running.
According to the book, many Kenyans run by feel. When asked about how they felt, they might say they felt good or that they were tired and stopped. No over analyzing. The run is done and over with. Compare this Westerners who can more often than not tell you every thought during the race, when, and why they might have done something differently.

3. Kenyans train in cushioned, clunky sneakers.
Yes, most Kenyans begin by running barefoot, but tend to train in cushioned, clunky sneakers during their daily runs. One theory, is that it makes training harder. The early years of running barefoot means they have developed a forefoot strike that is still there despite cushioning and will wear racing flats come race day.

4. By the time Kenyans begin "training" in earnest they usually have thousands of miles on their legs already.

Traveling by foot is the main method of transportation. Children run to and from school not because they want to, but because that is the only way they can get there. Cars are a luxury not an entitlement or necessity. Unknowingly, they have been "training" since they are young.

Kenyan athletes don't have jobs. They run, eat, and sleep.  Training hard means the body needs to have time to rebuild and that means not tweeting, checking out Facebook, or going out with friends with drink. To be the best requires sacrifice.


Overall, I believe Finn did a great job at describing what it might be like to live and train in Kenya for a year. There is no secret pill to become great, it takes hard work.

I find the "Kenyan Method" fascinating because it just seems sensible. I think we (Americans) tend to overtrain and under-rest. I run a lot of miles, but I don't run them all fast or hard, but tend to ALWAYS be at the back of my running group. Daily training seems to be more about competition than training. I was lucky to be coached early on by someone who told me to throw away the watch - and I think that has made a huge difference.

Thanks for the book review - I will definitely go check it out.