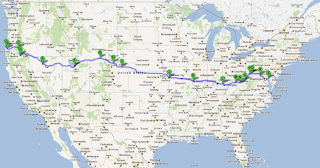 Jamie Summerlin is about to undertake a 100 day run across the country in an effort to raise funds for The Wounded Warrior Project. As a former Marine, Jamie ran his first marathon in 2009, and the idea to run across the country came to him during the summer of 2010. The purpose behind this run is to "to bring awareness and honor those warriors who had sacrificed life and limb to protect our freedoms".

I had a chance to chat with Jamie recently for an upcoming episode of the podcast and was impressed with not only his dedication but the fact that his wife and kids were going to be his crew as he ran across the country. Please check out his site and follow him along as he begins his run for Wounded Warriors on March 26th.
Posted by Unknown at 6:25 PM