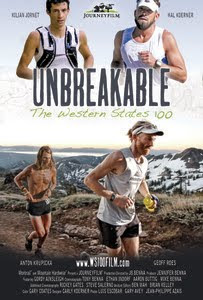 In 2010, the stars aligned  at the "Boston" of ultras that is the Western States 100 miler. It was talked about in running circles that it had the makings of an epic race. You had the two time defending champion Hal Koerner, a man who had not lost any of the ultras he had entered in Geoff Roes, the minimalist in Anton Krupicka, and the European phenom, Kilian Jornet. Simply put, the race lived up to the hype.

The film, Unbreakable: The Western States 100 , follows these men and their significant others in the year leading up to  and during the race itself. Director, JB Benna an accomplished runner in his own right, covers the race with up close action that is simply amazing given the terrain and speed at which the runners were going.  Watching the film with my wife as part of date night, I was giddy. Having the chance to crew this past summer for my friend Kevin at Western States, made it even all the more real as I pointed out sections of the course that I got to see as crew member and then parts of the course that I ran in the dark as a pacer were given light by the lead runners.

What I took away from the movie was this. Elite athletes are no different than you or I. Sure, they might run more on a daily basis or cover race distances faster, but that doesn't mean that they are immune to injury, stress, and the physical and psychological barriers that we all as runners face. This movie showcases all of that and does it in such a manner that it keeps the embers going that I might just have to run a qualifier and throw my name into the lottery to run Western States one day.
Posted by Unknown at 7:34 PM

I bought Unbreakable a month or so ago, and have watched it a few times since.
The one thing that separates Ultrarunners and other professional athletes are the relationships between the runners; before, during and after.
Thanks for the review.

It is an awesome movie. Glad you enjoyed it. I took the same sentiment as you. JB did a great job of capturing the struggles and the victories of the runners. The scenery was fabulous and the hype was all it could have been. It is also a great motivational video and I had to watch it a few days before my first 50 miler. I certainly am not fast nor elite by any stretch of the imagination but it was one of the things I held on to during the race.