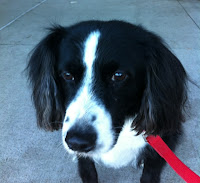 Before marriage and kids, we rescued Nemo. He had been an abused dog when we first laid eyes on him at a Meet Your Best Friend at the Detroit Zoo event. It was a match that almost wasn't. He was the first dog we saw, and we had told ourselves at the beginning that we weren't going to get the first dog we saw. However, we quickly decided to go back for him and the volunteer seeing us coming back, deftly talked a family out of getting him because of all the energy that he would require. They knew we were runners and thought Neo (his adopted name) would be happy together. Neo turned into Nemo after our favorite watering hole near old Tiger Stadium and we were a family.

I had longed to have a dog that I could run with, and Nemo was a willing partner. Faithfully, every day he would be up and waiting for me to run. He would run slightly ahead, low to the ground and kept a steady pace.He was all that you could want in a fellow runner. He never missed a running date, and listened to my diatribes. In snow, I would spray his paws with PAM so they snow wouldn't clump up and he would trudge on. He was most at home on the trails though when we got out there. Off the leash, he was free to run ahead and always stopped to check and wait for me.

My running log for several years was filled with his weekly mileage to make sure that he didn't overdo it, and yet he still logged thousands of miles. When kids became part of the mix, he took his side right next me as we rolled down the road. One dog, one man, and one jogger. The abused dog we had adopted had morphed into a loving dog who all the neighborhood kids would play with.

Time inevitably slowed him down and the runs became walks. Eventually, those walks became just letting him out to go, but he still retained his spirit. A nudge here with his cold nose or a paw flicking at you brought treats and petting.

We told ourselves that we wouldn't let him get to the point where he began having more bad days than good, and when the scales began to tip in that direction it was one of the hardest decisions we had to make. I was unwilling to keep him going because of my selfishness of wanting to have him around every day.

The morning we decided, I ran our old dog park loop by myself which was one of our daily run routes. I had to let my emotions spill out on the road and had myself a good cry. One of several that day. My wife knowing that I was far too emotional to bring him to the vet, offered to take him after work. I came home  early, and dammit, if Nemo wasn't moving around better than he had in days, but I new it was just a ruse. I layed on the floor with him and I think he knew it was time to go and was telling me that it was ok as he nuzzled in and licked my hands.

Thank you Nemo for being what George Sheehan had written for us as man to be which is first a good animal. .
Posted by Unknown at 11:10 AM

Sorry for your loss, Mike....dogs are special. I'm about to go running with my 2 dogs here in the New Mexican mountains. We lost our dog, Tucker, several years ago, but he will never be forgotten. This is a remembrance video my wife made that we look at from time to time. http://www.youtube.com/watch?feature=player_embedded&v=N_oCkVdHiq0
Rest in peace, Nemo...

That is a great tribute, Mike.
There will always be good memories.

I am very sorry for your loss. We lost our 17 year old Jack Russell earlier this year. We still miss her terribly. That said, I hope the memories of Nemo will bring comfort to you and your family.

Dude you made me cry. You are a damn good human. Just what every dog needs. Beautiful recording. Thanks for sharing.

Hi Mike, I am really sorry for your loss. I just put down my best friend on Sept 25th 2012. It was so hard, to loose trouble. Sending you a big warm hug. Glad to hear your doing better. Your Podcasts and your Dash are going to help with your grief.