AT - NewFound Gap to Clingman's Dome

If I had a bucket list, a thru hike of the Appalachian Trail would be on it. The Appalachian Trail is a 2,178 mile marked hiking trail between Springer Mountain in Georgia and extending all the way to Mount Katahdin, Maine. Originally, when talks began about heading to the Smokies this summer for a family vacation, I was really excited about the opportunity to hop on the AT and log a few miles.

Enter, Randy McCarter . Randy who listened to the podcast and heard that we were headed this way offered up a route and to see if I would be interested in running/hiking this section with him. Absolutely!! My own research into which sections to hit had been not so much and to have a local willing to show me the AT was a great idea. Funny, when Randy and I met early one morning to drive up the mountain, he admitted that even though he had lived here for most of his life, that he had never been on the AT. Well, at least we had a buddy system to hit the trail, and we drove up the mountain to drop one car at Clingman's Dome and then back down the mountain to start our foray @ Newfound Gap. 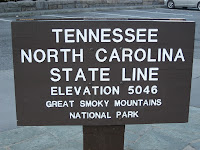 If I have learned anything from my visits to National Parks, it is to start early! Even at 7 am, the parking lot was like a ghost town, but upon our return several hours later, it would be like the frenzy at an after thanksgiving early morning sale. 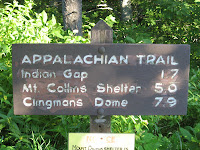 From Newfound Gap to Clingman's Dome was just under 8 miles and took us approximately 2 hours and 40 min to complete. The trail was filled with many sections like this below. 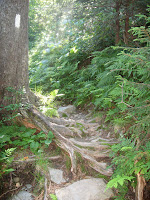 The motto was simply to run when we could and hike the rest. Randy was a great companion and I certainly would look forward to hitting the trail again with him. 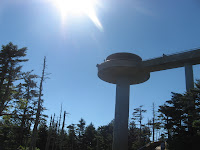 Although, you pop out on the trail at the highest point of the AT, there is this walkway thingy that you can go up to get views like the one below. 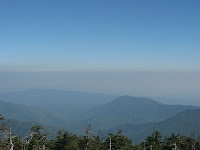 The best way to describe my intial experience on the Appalachian Trail is this: ruggedly beautiful.
Posted by Unknown at 8:13 AM