A runner is born 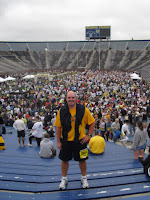 A little over 3 months ago, I received an email from my freshman college roommate via Facebook. He had heard that I was doing a bit of running, and was wondering if I would be interested in giving him a few pointers about getting back into running. Memories of all nighters, pizza, beer, sleeping in past our 8 am classes and putting on 20 pounds began running through my head. Without hesitating, I asked him for his number and told him I would call him that evening.

Upon calling Trent, he said he needed to make a change. Despite being in the armed services for several years and coaching his son's hockey team, he had fallen out of love with exercise and put on a few pounds. A few pounds I asked? Conservatively, he said, he had put on about 70 pounds. I told him to be ready at 6 am the next morning, we were going for a walk.

The next morning we walked. We talked about the past but more importantly the future. He had reasons for making a change. They were sleeping soundly as we walked around the subdivision. He wanted to feel better about himself, have more energy, and most importantly be able to play with his kids without having to stop and catch his breath every minute. He thought running would be the quickest way to drop some weight, but there was a problem. Running as he remembered it, was punishment during football and rowing.

I told him if he was really interested in making a change, then we were going to start slow. Due to his weight, I told him, there would be no running for at least a month. The first month would be dedicated to establishing a routine with not only forward motion but diet as well. He would begin by walking and building up his endurance. I told him that if he just started running that almost certainly he would get injured and would begin a vicious circle of injury, couch, injury, couch, etc and then where would that get him? Secondly, I had him start writing down everything he ate and when. One of the biggest culprits and I know a lot of parents who tend to do this is to finish your own dinner and then whatever your child doesn't as well. Probably, not what he wanted to hear, but I told him that if he did this then after one month we would start to look at adding in some running. Furthermore, I told him that I would meet with him weekly and we could go over the plan as we first walked and then ran.

A month went by, and Trent stuck to the plan. He walked 3-4 times a week and began to watch his diet. As a result, the weight slowly began to come off and he began asking when he could start running. I told him to pick a local 5k and gave him a couch to 5k program that we modified as he initially had some shin pain. His goal race was the Big House 5k. I ran with him the first time he ran 2 miles without stopping and the look on his face was amazing. I could see he was beginning to love running.

Soon enough the school year began, and respectively we both became sick and busy meaning that we didn't get a chance to run together again until the day of the race. 12 weeks and 25 pounds lighter, Trent had done more than he thought he could. The 5k that we ran was just icing on the cake. From walking to running a full 5k, he embodied what it means when someone is inspired to make a change. A runner has been born.
Posted by Unknown at 6:59 PM

Awesome Mike what a great story for everyone concerned!

That is awesome. Congratulations, Trent!

What an amazing story! I wish I could inspire people like that!

Mike, that is so awesome. That look will last a long time your memory as being the friend to help get another friend in the right direction. I remember listening to the 2 of you on your podcast - truely a runner is born. Kudos

Congrats Trent! I can't think of a better race to begin with than the Big House Big Heart. I ran it this year for the third time and every time I come out of the tunnel into the stadium is as exciting as the first. I'm a huge UM fan (and alum) and being on the field in the Big House is an experience without compare.

My first race as a newbie runner was in November 2006 at the Tortoise & Hare Ann Arbor Turkey Trot 5K. I finished in 32:58 and I was so proud of myself for doing the whole thing without stopping. At the time I was still in the early stages of my own weight loss & I still weighed over 200 lbs. Running was difficult.

Three years later...I've lost a total of 65 pounds, run countless 5Ks (and my best 5K times are now in the 22-minute range, a 10-minute improvement), and am about to run my third marathon (New York City). And next April I will be running the Boston Marathon.

I never thought any of this would happen. Never! And it all started with that first 5K.

Just watch out...it's a slippery slope. But a fun one! Good luck with all of your running endeavors!