If running is one passion that I want to pass on , then my other as a youth and as an adult that I wish to pass on is baseball. The smell of freshly cut grass, the crack of the bat, the oversized wad of Big League Chew, and the exhileration of making a game saving play or hit, is something that I will always remember as a youth. Whether it was wiffle ball with my neighborhood pals, or in an organized league, I have fond memories of playing America's favorite past time. 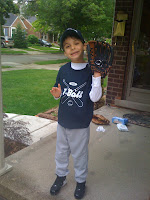 Since Little Dirt Dawg turned 5, he was able to start playing t-ball this season. Grant it, he may be as tall as some of his 7 year old teammates, but that has not stopped him from trying to pick up some skills including switch hitting and fielding.

As a member of the Crickets, his first game was this past weekend, and I have to say that I am glad I am an endurance athlete. Those games are long! Six innings, practically no one gets out and there are nearly as many parents out on the field helping the kids as there are players. 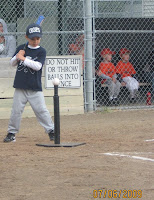 However, that being said, I wouldn' t trade it for a moment even when Little Dirt Dawg switched from being in the ready position to writing his name in the sand as he was out there having fun and proudly proclaimed at the end of his first game; "We won, it was a tie." 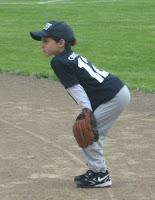 Hey Dawg...My son just graduated this past Friday...but I remember T-Ball and it was the best time ever..I played baseball, football and basketball in High School and yet when my kid played T-Ball that trumped anything I ever did....so enjoy as the years go by quick and then all of sudden they graduate....so don't blink and savor the moments...