Fueled by some Starbucks Pike Place and a Chocolate Glazed Donut (Healthy, no, but I was gonna run 13 miles, I figure I could splurge and besides that donut was eyeballing me @ the store, I simply could not say no), I headed out to Island Lake to see if there were any takers to get in their Worldwide Festival of Races Half Marathon. The air was crisp and necessitated some arm warmers and glove as I took off. 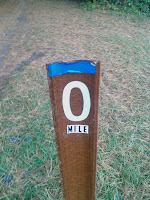 To put it simply, there is not a better time than in the fall to go trail running. The trail was in pristine condition and the smell of leaves and of those fluttering to the ground quickly had me in the zone. 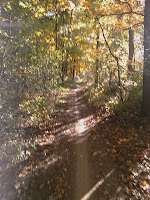 The miles were rolling by when on the yellow loop, between mile marker 1 and 2 there is a nice little climb after a bridge crossing. I heard the "thump, thump" of wheels rolling behind me and pulled off to let 4 mountain bikers go by. One of them said "you will catch up." Darn right I will. At the base of the climb, I made an effort to get right behind the last guy, and when he turned around to look, I told him he was fine, just keep going. So there we were, 4 mountain bikers and 1 dirt dawg ascending this hill, when I could hear "on your left" and turned to see another mountain biker at the base beginning his own personal quest to shoot up the climb as quickly as possible. He quickly closed the gap to me, but I wasn't getting off to the side. Instead I kept my line and pace, and eventually 2 guys pulled off the side, I was third up the climb, and when we got up to the top, I pulled over and as the mountain biker passed me he said, "Nice effort up that hill." And like that, I settled back in my zone letting my mind wander to take in the beautiful fall day. I passed the mandated half marathon mark @ 1 hr 58 min 30 sec and finished my trail run with a distance of 13.32 miles in 2 hr 1 min and 13 sec. I was sad to see it end so quickly but excited to know that even if I was running alone on the trail, there were others around the world running their own virtual distance as part of this Worldwide Festival of Races and look forward to their stories. 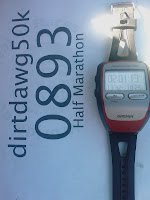