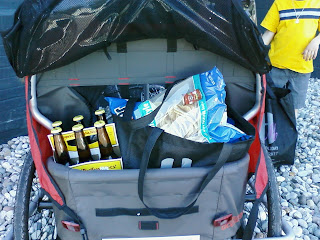 In the face of $4 per gallon for petro, the onset of what I hope is summer weather, and the fact that Royal Oak and surrounding communities are easily accesible by bike or foot, today was the first of many i am sure in which in all errands are done w/o the use of the automobile.

Important to note that you can fit 2 bags of groceries
(for super nachos) in the back of the doodlebug.
Posted by Unknown at 8:55 PM

That's great. We're lucky enough to live within 1/2 mile of both Whole Foods and Trader Joe's, so we do that often as well. As we live near a busy intersection, it's often faster just to leave the car.

Sorry for no follow up over the weekend. Family had me, and so I ended up doing mostly dusk/nighttime runs. Got in a few good 10 milers though.

I had a question about the North Country 50 I was hoping you could answer: I've read that the course is hilly. Would you compare it to the Potowatomi? I'm trying to figure out what local trails would be good practice for it.

Also, a weird idea I had - do you think depriving oneself of sleep then going for a run would be good training for late-stages of an ultra? The idea came to me late-night in the midst of a long workday. Probably insane, but hey.

No prob. Completely understand how family can change plans.Training for 50 must be starting soon?

I did most of my runs @ Island Lake and Stoney Creek and did one of the training runs offered on the NCT over the summer. Poto is probably a little bit hillier and more technical than NCT. Check out August 07 for an entry entitled Big M Recon.

What would be the purpose to your late night ultra run if you are planning to run the NCT 50 miler? Spoke with a guy during the Toledo Marathon and he would do a late night run Friday night(15 miles minimum), rest the next day and then run early Sunday morning. His rational was to experience the effects of running on dead legs.

Thinking of doing a trail marathon (DDMC #6) the weekend of June 7/8 @ island lake.

Yeah, it's "started" but not intensely. I've been careful and backing off when my hip tickles even a little. I've filled in running gaps with 20 mile bike rides and long swims to keep active. Hopefully this will prevent further IT band problems.

Good to know the NCT isn't as nasty as the Poto. If that was the case I think I'd be screwed.

A portion of the DDMC6 might work - but I don't know if I can hang at your pace for too long. I can try, though.

I thought trying a long run on 3/4 hours of sleep (not uncommon for me) would be like running with low energy and tired legs. Perhaps if I get used to running like that, the latter stages of the race won't seem so unfamiliar. Don't know if there's any logic to it, though. Sandwiching long runs is probably a better idea.