Today marked the end of the Fun Run Series with the first ever banquet and beginning of little dirt dawg's quest to win the Tour de France in 2032. 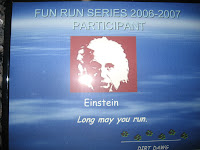 for participating in the inaugural season of the fun run. Participants reminisced about the highs (86 degrees) and lows (4 degrees--BRR!!)of the season and marveled at the # of miles covered this year (400+) as well as classic moments such as Vanna White stopping and sitting down and telling J-No and Abstract to go on w/o her; Big Red asking, "So you guys run to the bridge right?" (which is only a 1/4 mile away); Twinkle Toes tripping on his shoelaces and landing spread eagle in the middle of the road, and Einstein with the classic quotes such as , "“Can’t you make his dr. appt @ 3:30? I have to run today.” & “It’s not the points, but the avoidance of ridicule and emotional abuse that I would have to endure that is my motivation.”

Look for the Fun Run Series to return in September!!!!!

After ending one weekly ritual, little dirt dawg and I got out the bike that he said was too small and performed some surgery on it. 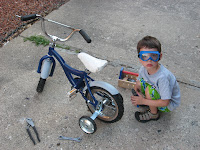 5 minutes later, he was well on his way to scaling the Alps and Pyrenees and yelling out, "Daddy, me ride around block with you." and "Me ride with Timmy".Look for him to be a contender in the GC at the 2032 Tour de France!! 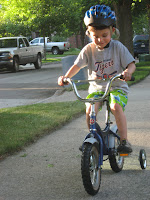 Perhaps a future recipient of the WCIFA!

Hey, I recently added a news widget from www.widgetmate.com to my blog. It shows the latest news, and just took a copy and paste to implement. Might interest you too.