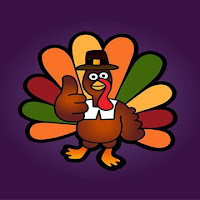 Really this is just an excuse to not have to go shopping with the masses and to your a**es . Ate a little to much ...run it off here!!

Lose the Turkey Fat Ass 50k
When: November 26, 2011
Time: 8 am
Where: Kensington Metro Park/Island Lake
Get out there and move your duff to eliminate the stuff consumed on Turkey Day. An easy “fat ass” ultra, with no fee, no aid (maybe), and probably no awards to be given. Mainly on bike paths, with about 13 miles of trail. Wear something hunter orange or really freaking bright to avoid being confused as a deer in the woods. Contact dirtdawg50k@aol.com for more info.


Course:
Begin @ Kensington Metro Park. *Note* There is a daily $5 entry fee if you do not have a permit. Park at the East Boat Launch and head west on the bike path trail. Just before heading over a bridge, there will be a path to your left that goes under I- 96. Follow the path under the freeway and into Island Lake. At the fork just above the short hill go right. Follow the Island Bike Path. Just after the 3 mile marker on the Bike Path there will be a turn off to the left. Follow that an into the Mtn. Bike Trailhead. *Note* There are port a potties located here.
Follow the blue trail head markers and continue on the trail until past the 8 mile marker. There will be a Two Way Direction Sign with a blue arrow pointing forward and a yellow sign turn left. FOLLOW the yellow sign to the left. Continue on the yellow trail until you return to the trailhead parking. Return on the bike path back to Kensington Metro Park and your car. Total Distance to this point approximately: 23 miles. (approximately 13 miles of this are trail)
To complete the 50k distance…do one loop on the Kensington Bike Path (approximate distance 8.5 miles)
For those of you preferring to do a shorter distance less than a 50k and don’t want to get lost, or run trails…you can just run loops around Kensington. Each loop is approximately 8.5 miles. Or run the 23 miles out and back section and stop.
NOTES:
1. There is no fee to run this (ok..except for the daily entry fee to the park. Most times though in the fall, there is never anybody checking the cars for permits)
2. It is HIGHLY ADVISED that you wear something hunter orange or very bright out on the trail section.
3. There is no aid. I might have something set up at the start/finish, and somewhere along the way, but it is a approximately 23 miles for the first loop.
4. You are responsible for your own safety out there. This is merely a loosely organized fun run that just happens to be a wee bit longer than a marathon.
5. Please email me with your interest so that I can begin to take a head count
Notes:
Here is a link to what my Garmin measured last year: 2010 edition
A short video (made in 2009 during the inaugural year) about the course can be found here: @ Just Finish
There really won't be any results, not sure if I will have any sorts of awards and depending on weather, maybe might have some post race grub.
It will be fun, cause it's a run!!

Shoot me an email @ dirtdawg50k@aol.com for further info or to say if you are gonna strut your stuff because you ate too much and need to run it off your duff!
Posted by Unknown at 9:42 AM No comments:

Yesterday, I had the opportunity to participate in a local bicycle ride sponsored by the Sierra Club called the "Green Cruise". Billed as an opportunity to celebrate the many forms of human-powered transit that help keep you and the planet healthy. This event was held one week before Metro Detroit, is invaded by classic cars from all over in what is called the "Dream Cruise". 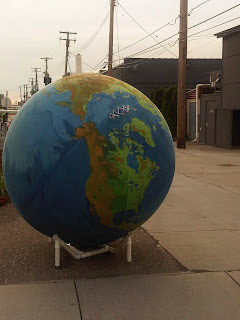 There were a few ways to celebrate and participate in the Green Cruise as outlined on the billboard. The 40 mile route would take you south from Ferndale towards Detroit with several great areas to see while the 20 mile ride would head north and wind through several suburbs before returning to Ferndale where there would be several events and vendors. 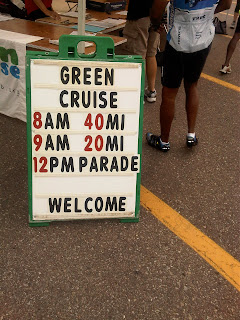 Rolling out from my house and riding towards the event, I mulled over my options for the rides. I haven't ridden my bike much this year, but was fairly confident that I could keep up with the "faster" group on the 40 mile loop. Worst case scenario is that I would have to drop back to the "slower" group on the route. There were no prizes or pride to be won on this day, just an opportunity to use my own two legs thrown over a skinny wheeled contraption to "cleanly" see the sights and sounds.

Mother Nature was in agreement for the ride as we were treated to temps in the high 60's and clear skies as we headed downtown. This was a great way to see several parts of the city that I have not seen when running the Detroit Free Press Marathon or while hanging out with the family.  First rest stop before heading out to Belle Isle was along the Detroit Riverwalk. It was here that I was able to pull off my arm warmers and try a new bar that I had picked up at REI recently called Honey Rocket Chocolate Energy Bar. Yummy! 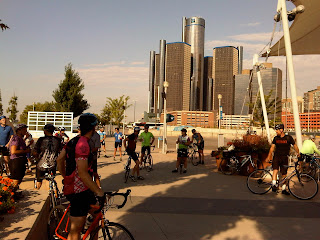 After the rest stop, we rolled through the  William G. Milliken State Park 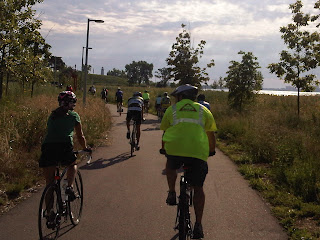 on our way towards the Dequindere Cut Greenway 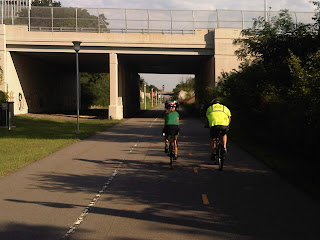 My favorite area to roll through was the Heidelberg Project. Even though I have lived in the Metro Detroit area for well over 25 years now, I have never been through this area and was really happy that another cyclist explained to me this amazing area and why it was created. Amidst drugs, poverty and blight in the area, people wanted a way to call attention to the bad and rid themselves of it in the area by using art. Since then, the Heidelberg Project founded by Tyrone Guyton has grown to encompass two blocks of color, symbolism and hope and expanded to provide children with hope and inspiration through art. 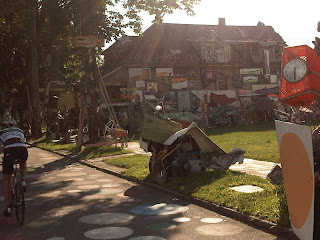 While this was an event meant to celebrate human powered movement, and one that I was happy to partake in, I couldn't help but think of several other things throughout the ride. First off, while it was amazing to see pockets of urban gardening in the city, there were also many areas of blight where once beautiful homes stood like shells of their former selves with decay and garbage lining the streets.  Secondly, the idea that a mass transit/light rail would be built to bring people down to Detroit instead of driving their cars is laughable at best. Detroit is known as the "Motor City" and people love their cars. No way are people going to park their cars at 8 mile road near the dilapidated and now defunct State Fairgrounds (note: there is no State Fair in Michigan) to ride down Woodward Avenue through blight and despair to hit only pockets of areas that are safe and have anything of value to do.  Lastly, this is "Detroit" though and we are a blue collar town. We don't give up. This once great city will rise again, but it will take the collective efforts of everyone not only in the city but the suburbs as well to make it happen. Perhaps events like the "Green Cruise" can be the spark that will ignite the fire.
Posted by Unknown at 5:29 PM No comments:

Becoming a Sherpa Once Again

With the deadline fast approaching (read: rate increase ), I knew I had to negotiate. I had to sit the wife down and get her to come to the table to agree upon a fall marathon schedule. This wouldn't be easy, but I knew that it would be resolved more quickly than our national debt crisis.

Since her spring marathon, she has tip toed in and around running a fall marathon. That tip toeing is very similar to her training program where it has seemingly been more of a stutter step than full throttle. With her, it is just best to let her go and not pressure her, but we could ill afford more time. I wasn't going to pay anymore than the $90 fee that was already being assessed to run the Detroit Free Press Marathon.

After what seemed like a scattershot training plan to date, she ran/walked a 12 miler over this past weekend with one of her fellow training partners at Kensington Metropark and I knew it was time to make my move.

Let's be honest here, and say that I needed an answer as much as she probably did. After being probed by Martians and being a sherpa for the wife at the Country Music Marathon this spring, I hadn't achieved any of the goals that I had set for myself at the beginning of the year. Then a funny thing happened, over some beers.

Yup, good ole cowboy pops/oat sodas at Dragonmead one evening, and an encounter with a running mate. What resulted was me toeing the line of a local 5k a few weeks back. Surprisingly, without any speedwork, I ran my fastest 5k in several years, and the wheels started turning. I knew in the back of my mind that the wife would eventually want and need me to be her sherpa for a fall marathon, and if I was going to run the marathon with her, why not turn my attention to running "fast"? Why not return to doing some 5 and 10k's by doing some speedwork but still keeping the miles up in prep for the marathon and the 3rd Annual Lose the Turkey Fat Ass?

That was my ticket and platform I would stand on. In return for being a sherpa once again, I could run some 5 and 10k's along with putting on my annual fat ass race. I really did enjoy the opportunity to run a marathon with my wife, and a chance to do it in our hometown would be even cooler. There wasn't much deliberation as she quickly agreed to the terms and stated that even though her two running partners may be running the race as well that, I knew what she needed during a marathon. I know when to run ahead, fetch drinks/fuel, and when to let her be with her thoughts. Apparently with me being sherpa there would be little chance that as she put it, "would step off the course, and go home with one of my friends".

So there it is, a mutual agreement that benefits both parties and is in the best interest of both parties. Politicians, you could learn from this.
Posted by Unknown at 5:47 PM No comments: