Its her time.
She came out to my first 50k and watched me run in the rain.
Not long after that, she ran her first marathon.
Before marriage and before kids.
She ran a 1/2 marathon in Columbus and cheered as I got my BQ.
Its her time.

I said I wanted to run a 100 miler and she said she would crew.
For a gal not adept at trails, she paced me at night
In my darkest hours, and she got me back on track.
I wouldnt have finished without her.
I made it to Boston and of course she was going.
Not sure who was more excited.
Its her time.

She has continued to run.
Start then stop, repeat the process, more than a few times.
Its her time.

She said she wanted to run another marathon.
It would be her first in 10 years.
After we had gotten married and had kids
Its her time.

She picked the race
And there were some rules
No coaching from me, but lay out her stuff for long runs.
Its her time.

On Saturday, we toe the line
And I will run, snap pictures, and fetch water.
Its her time to shine.
Posted by Unknown at 8:43 PM 9 comments: 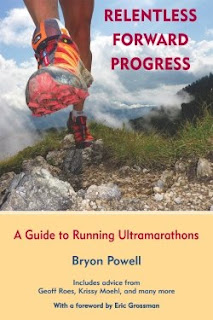 In a day and age where information is seemingly just a click away, it can be overwhelming to someone who is looking to dip their toes into a new arena like ultramarathons. Trying to sift through the seemingly endless plans, blogs, and embedded links on websites for even a newbie ultra runner, might have them DNF'ing before they even toe the line of their first ultra.

To address this issue, Bryon Powell of Irunfar.com, has put together and easily digestible but comprehensive book on running ultra marathons called Relentless Forward Progress. I had the pleasure of sitting down and chatting with Bryon for the podcast (DDRD: Episode 86) and he said he wanted the book to read like if he was going for a run with you and talking out on the trails. I believe he has achieved just that.

Leaving no trail unexplored, Bryon and with some contributing pieces from people like Geoff Roes, Krissy Moehl, and Jamie Donaldson, covers everything you need to know about how to make the transition from marathon to ultra training. One of the things I really like about the book is that it has several plans that show the reader a progression on how to move from a 50k up to a 100 miler and on plans that average 50 or 70 miles a week.

The barrier to breaking into ultra marathons if you ask most people who have been at it is mainly mental. Sure, you need to put in the miles, but the real training usually takes place in the mind. Relentless Forward Progress helps to bridge at gap at shows anyone who dares to open the cover that the impossible can be achieved. This is a book that even myself with some ultra experience under my belt will be going back to again and again.
Posted by Unknown at 11:17 AM No comments:

You suck. You really do. It's not like you are not hard enough already. Whether it has been using you as a measure of my fitness or chasing a time that would let me ride the unicorn, you have never been easy. You force each and everyone during the course of their travel over you to bring their best In some ways, toeing the line with you is like going into a title fight with each of us trading blows throughout the race in search of excellence. I had put in a solid training camp. I was ready.

Maybe word had spread throughout the galaxy that I was going "all in" and my shoes had been set to stun, that you began to get scared. Perhaps you thought you needed to soften me up with some body blows prior to the start of the race by sending some Martian minions to invade my body and force me to purge necessary fuel from my body. My engines were less than at full capacity come takeoff, but my confidence had not wavered. I still believed.

As I began my flight pattern, I held back on pushing the engines to full throttle. Almost on que, those Martians which I had thought been eradicated by my efficient body propulsion methods began in unisoning jumping up and down on my stomach like they were at an inflatable party. It was inevitable that when I went to push the engines, they sputtered. A radio check to the legs screamed that they we're giving me all they had.

My mind would not give in, and I continued to drive the legs toward a 1:41 half marathon at the turnaround. Ingesting some fuel, I continued my drive, but the Martians would not allow me at the same rate. Instead of jumping on my stomach, they began crawling my my windpipe and by mile 18, I had to pull over and purge myself of them. By now, the body blows and purging had taken me far south of my time goal, but I wasn't raising the white flag. I expelled any remaining Martians again at miles 19 and 21 and continued at a rate constant with being on fumes. The eradication of the Martians had also meant that any liquids left to cool and fuel my systems were gone.

The remaining miles I was joined by half marathoners and we were all locked in our respective final rounds with you. A couple of sips of some powerful green liquid and my energy levels began to rise, but it was too little to late for the clock and I crossed in 4 hr 1 min. However, marathon, even though you threw were underhanded in your approach to try and break me, I didn't fold. All in meant all in and I gave it my best even if the clock showed otherwise.

Here's till we meet again,