An adventure is what you make it

I don't have back door access to trails, fire roads, or pathways that lead to those epic adventures that you read about in magazines, so when the opportunity arises to turn the average run into a mini adventure, i have learned to take full advantage.

With the M-I-L (Mother in Law) watching the children and the wife headed over to pick them up, I gladly stated that i would go home, let the dog out, pack up my 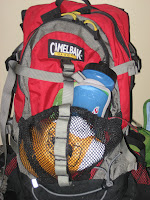 with a change of clothes and run over. 8.96 miles later and a high five from an employee i ran into at a parking lot and i was there. No added pollution to the environment, no sitting in traffic, and a recovery run at that!

*** Justin Verlander throws a no-hitter, striking out 12 and I missed it!! Due to family time, i received a call from my dad saying he was 2 outs a way from a no hitter. Not believing him, thinking back to the time when i was an RA in college and he pretended to be a student saying there was a fire on his floor, i was skeptical. Dad was right****
Posted by Unknown at 9:39 PM