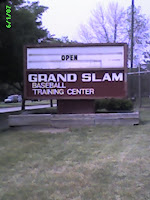 For my birthday, Dirrty Girl and D.O.D. (Dear Ole Dad)got me a slot in the Detroit Tigers Fantasy Batting Practice scheduled for June 17th.

Now, I must admit that i was a pretty good ball player back in like 6th-8th grade and even played JV in high school one year when my knees had some growth plate thing going on, but i haven't stood in and faced a pitcher in like 13+ years. With the impending fantasy opportunity coming upon me, i looked at the early release from school to get in a few hacks, and i mean hacks, in before picking up little dirt dawg for some swimming at Goldfish Swim School.

I never made it. It was terrible. I swung and I missed a lot. It was like 89 degrees and i felt like i was in air conditioning as much flailing as i was doing. After about 75 pitches, i started to make some decent contact but I am admittedly nervous. I need to practice.... a lot..... I knew that i wasn't going to into Comerica Park and go softball guy, but I want to get it out of at least the infield!!
Posted by Unknown at 7:54 PM

Private yogo sessions, Tiger batting practice...I think your wive's gifts are all focused around putting you in challenging uncomfortable positions.