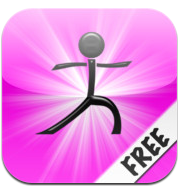 My buddy and I were talking about yoga the other day over a few cowboy pops at Dragonmeads,  and he said he wished that yoga places offered like a men's only beginner class to ease them into practicing yoga. Classic case of being a strong runner but inflexible and didn't want to look or feel like a dufus in a class.

Problem solved, I told him....Simply Yoga. Simply Yoga is an app that boasts a free version and paid version ($ 2.99) available on Itunes that has an easy way to immerse yourself at home, on the road, or wherever into yoga.  Each of the practices has a time limit of 20, 40 or 60 minutes. In the free version, you get access to only one routine while the paid version gives access to one more practice. Both of the practices are centered around multiple rounds of Sun Salutations which in their own right can be a challenging and invigorating practice.  There is also the availability to start a practice at a certain pose or create your own routine within the paid version.

The voice of the instructor is calm and even keeled. One thing that I enjoyed is that there is video of a woman going through the practice as the instructor calls out the next pose.  The woman does not use a mat instead practicing on carpet and there is no instruction for modifications to any of the poses if they prove to challenging.

I did several routines using the free version before plunking down to what amounts to a Vanilla Latte at Starbucks for the paid version. With local yoga class fees running from $5 - $15, picking up the paid version was a no brainer. I now have a traveling yoga practice available at my fingertips. For those looking to try out some yoga at home before going to a studio, this is a great introduction as well.