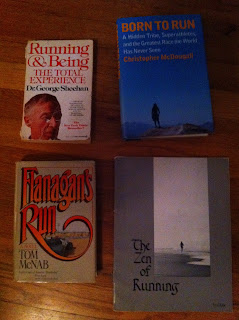 I would be remiss if I were to talk about a Running Mount Rushmore that did not include books as well. No doubt, the people I mentioned before  influenced me more than the written word, but that is not to say that I have not found inspiration or information between the covers of these books below:

Published in 1982, Tom McNabb's tale follows runners as they cross the United States in race very similar to the Bunion Derby in the 1920's. I came across this book at a resort in Mexico on vacation several years ago and was entranced. Immediately, I was taken with the tale of running a race across the country and following the tales of the runners in a day before GPS watches, mp3 players, and hydration packs. Some were running toward the hope of wealth, others were running for glory, and some were just running because that is all they know how to do.


The Zen of Running:

In its purest form, running is about enjoying the motion of moving forward.  This short book written in the early 70's might be considered "hippie" as the author is seen running shirtless, and with jean shorts, but  there is no denying the joy seen in his face and the grace fullness in his movement. To date, this was one of my favorite podcasts ( Episode 77) to produce when I read this book in its entirety.

This book seems to be steeped in the forefoot of the "natural" or "barefoot" running tide having  found its way into the mainstream. When I first read the book though and why I have returned to it, is the simple joy found in the Tarahumara Indians and their respect for running. Take away all the medical information, media drivel about turning a quick buck on some new found "movement", and there really is a message about just running. Heading out the door, enjoying your surroundings and those that you run with.

When I stupidly threw away all my old issues of Runners World that contained the columns of Dr. George Sheehan, I began accumulating his books to return to revisit the topics and themes that be wrote about. If there was anyone that could be considered "the running philosopher", I would argue that you need look no further than him. His brutal honesty about not only his misgivings but also what running gave to him are what continue to draw me back to his readings.

So that is my list. Surely there are several others out there that I have read and are in my collection, but to date those are the ones that have meant the most to me. If you could choose running books that have inspired you, what would they be?
Posted by Unknown at 10:27 AM

Some of my favorites: (Pardon if I screw up the names, this is off of memory).
Slow Burn: Stu Mittleman
Cold, Clear Day, Frank Murphy
Feet in the Clouds, Richard Askwith
and because I feel I need to add one from one of our favorite authors...
Going the Distance, George Sheehan.

I remember hearing David Horton talking about an inspirational book that got him into ultrarunning. It was Flanagan's Run by Tom McNab. I must find this book. Thanks Dawg