The 3rd Annual Lose the Turkey Fat Ass 50k reaffirmed just how cool the ultra scene is. This year, marked the return of a friend, Michael Runner who had come to finish not only his first ultra, but his first Fat Ass event, a podcast listener from Florida who just happened to be visiting family, and a runner who had to ditch the upcoming Rock N Roll Las Vegas Marathon and run this.

Despite the promise of no fee and no aid, 15 people lined up in really bright colors heeding the warning that the course would veer onto trails and there may be hunters out on the course. 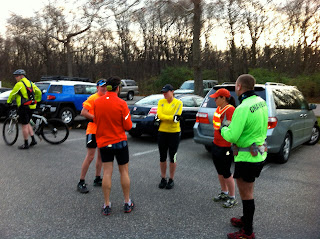 In the past, a fellow Fat Ass producer in the area had been kind enough to set up an aid station at the trailhead where runners would hit twice at the 5 and 18 mile mark and laid out a fat spread. This year, I was just going to place some water jugs at the trailhead, but a fellow ultra runner chimed in and said she had to start earlier then the start time and that she would open up her truck and laid out a fat spread for runners to feast on. 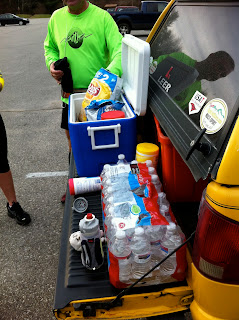 With temps in the upper 50's, the trails were in immaculate condition and even the hunters had to be impressed with the train of runners that were out there. 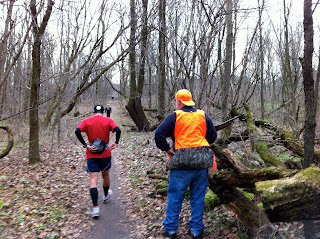 While people had complained about the nature of the course with it being too much road and not enough trail, I was happy to spend the 13 miles on my trails where I first cut my teeth. 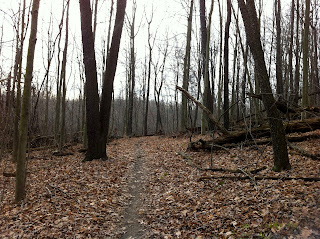 As much fun as it was for me to notch another 50k and an unofficial official 2nd place finish, it was even better to see Mike finish his first ultra and that it was the Lose the Turkey Fat Ass was even pretty cool. 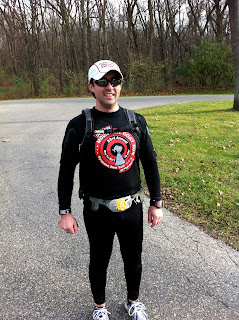 In the end, the course always measures a wee bit longer than a 50k, but I was happy to get out there and enjoy the day with some old and new friends. 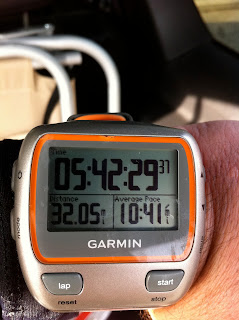 Good job D.D. Very cool of you to put this on every year. I aspire to run an ultra some day. Maybe I can even make it out from the Pacific NW to run in your LTKFA50K someday.