In support of Dirrty Girl's return to running, I was more than supportive of her saying that as a family we were going to head down to the "D" yesterday to partake in the 27th edition of the Fifth Third Bank Thanksgiving Turkey Trot. Two years ago, we had done the 5k as a family in rather raw and wet conditions and then drove up a bit to catch some of the parade. Big mistake in the sense that we (read: parents) did not change and were freezing as wet clothes stuck to our bodies while watching the parade. Dirrty Girl had an answer for that. First off, we were going to do the 10k and we were going to stay down at the RenCen the night before. That way, after the race we could get change and then included with our hotel room were VIP passes in one of the grandstand sections along the parade route, along with a thermos of coffee and hot chocolate. Even though we live less than 20 miles from the city, we thought it would be fun to go down the night before, ride the People Mover and eat at Greektown with the kids.

Race morning, I had a few concerns. First, it was kind of chilly (mid 30's) and the wind was whipping around. Second, as evidenced by the picture below, Little Dirt Dawg had not ridden in a jogging stroller since I can't remember when since he is so tall and would rather run. I am thinking next year, maybe the Mashed Potato Mile or 5k for him. Lastly, the number of runners was estimated at over 14,000 and since we were just out for a fun run would be far back in the pack. Given that and our estimated time for the 10k along with the parade start, we smartly decided to drop to the 5k. 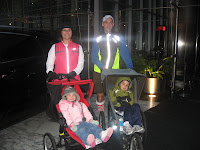 ( Note: This could be our cheesy holiday family photo) 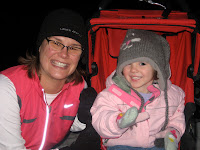 (Note: Dirrty Girl in her new running gear and Dirrty Feather keeping warm before the race)

Now, as for the Turkey Trot, it was a hoot! We ran together as a family and gave high fives and low fives, courtesy of Dirrty Feather in the stroller and stopped for cookies at the aid station. There were people though there with Garmins, Ipods, and Fuel Belts...for a 5k/10k!! Come on people...there were tons of people along the parade route cheering runners on and the rising sun took some of the early morning bitterness out of the air, enjoy the day, soak up the atmosphere. My only complaint was that even though we started near the back, there were tons of runners who thought that jumping over the jogging stroller wheels or cutting in front of us was a sound idea. You want to race, do it at some other race and at several points, I had to slam on the brake to avoid hitting some idiot. I think we finished in around 40 minutes for the 5k with a mad dash for which stroller crossed the finish line first. A quick jaunt back to the hotel, shower, and inhalation of food brought us back out and to our parade seats for a bit until the requisite shuttling between our parents houses. In the future, we probably won't remember our time for the run or the weather, but we will remember the fun we had together and that is all that matters this time of year. 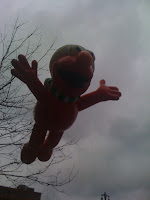 Dirty girl is super smart for suggesting staying by the race. Yeah for dirty girl!!