The running gods must have been smiling on Michigan today, because this was the first and hopefully not last, Lose the Turkey Fat Ass 50k today. Chilly temps near or below the freezing mark at the start warmed to a pleasant and comfortable mid 40's by early afternoon. From emails and word of mouth about 8 people had expressed interest at my first attempt at putting on a "fat ass" event. Even though, I had stated there would be no awards, I just couldn't help but put together a small swag bag. (Special thanks to Run Vegan Run for shipping some last minute items). Items included a couple of Vanilla Gingerbread GU's, a snack size Clif Bar, a couple of Sport Beans, a trial size of Vaseline, a couple of 15 spf Lib Balms, and a small medical kit all housed in a 2 1/2 gallon ziploc bag. I put together 10 just in case a few extra runners showed up. 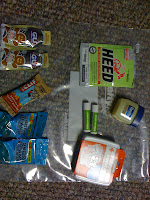 To my utter surprise, there were about 12 runners at the start of the "fun run" and they were pleasantly surprised with their swag. Not all of them were going to run the full 50k since we got back to our cars at around the 23 mile mark, but it was a pretty cool site to say "ok, let's go" and have them wait for you to start leading this pack of ultra runners down the road. 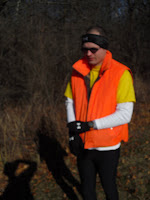 Since we were passing through areas open to hunting, most of them had at least read the race description and wore some hunter orange on them. 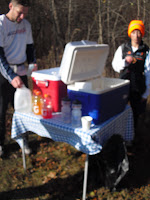 And even though, I had said there would be no aid, Craig (director of the Fallen Leaves Ultra), had contacted me and said that he would just be running the trail section due to a race next weekend and would set up an aid station that runners would hit at approximately the 5 mile and then the 18 mile mark. Waiting at the trail head were a few more runners who had heard through word of mouth about the event. The aid station was a welcome site for fluid replenishment and requisite chocolate chip cookie and potato chip inhalation. 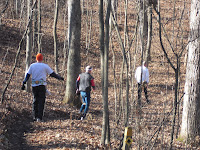 The trails were in perfect condition and it was amazing to see runners all along the trail, as I have run this trail many times in solitude. Camaraderie and conversation made the miles fly by. In the end, I finished the 50k (ok..garmy said it was somewhere north of 31.25 miles) in just under 6 hours and had an awesome day running with a bunch of fellow ultrarunners. It left me one tired dawg, but excited at the possibility of making this an annual "fat ass" event. 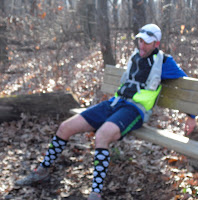 Great job, what a cool way to spend T Weekend!

FA are the best! Where was this at?

We have a FA in Youngstown OH Saturday Dec 6 if you are interested.

Awesome, I am so glad it went well! Love the socks, ya know, that is like your trademark now. :)

Great job Mike! Wished I could have been there!

I'm glad you had a turn out of 14 people (according to Nate), and that people enjoyed themselves. Mainly I'm very shocked AND astounded by Nate's decision to run the full race instead of just a marathon distance as he had told me.

Due to his running and my dancing that night after he got back, both of us were incapacitated by excruciating pain all day Sunday. But I think his was a GOOD pain. Mine just made me ache for death.

Wow...I am in awe. I'd love to run an ultra so I draw inspiration from you. Keep blogging, I will love to follow. Hope you're recovering and ready to get back out there. P.S. love the socks, too :).

Awesome job man! I love the name of that race! I'm also diggin those compression socks too!

It is very strange that you brought it up with your efforts. I get many things from here.http://www.haircareness.blogspot.com/

Hi - I am really delighted to discover this. cool job!