Dirrty Girl had this wonderful idea a few weeks ago that we should institute a new family tradition and run the Turkey Trot 5K in Downtown Detroit with the kids before catching some of the parade and then making the requisite family stops for caloric consumption of ginormous proportions. I was all gung ho of course, and only wondered what the weather might bring. Nervously, after the Gobble Dash @ work yesterday, I headed down to pick up our race #'s, make Little Dirt Dawg's, and kept changing the radio and looking at the weather channel at a system that was supposed to bring snow and a driving wind. 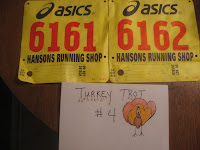 While the rest of the family slept, I did a short recon run this morning to see what the weather was like and to advise on the proper gear needed to complete the Turkey Trot. It did not look promising as snow showers and a pretty stiff notherly wind threatened to derail a tradition not yet started. Dirrty Girl and I bundled Dirrty Feather and Little Dirt Dawg in their warmest gear, crossed our fingers and headed down to the D. 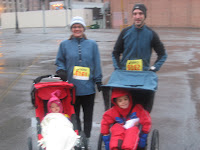 Luckily, just before the race began, the snow showers stopped and it was almost pleasant, if you called 34 degrees with a northely wind pleasant. Little Dirt Dawg was in full Thanksgiving mode as he yelled, "Gobble Gobble" to fellow racers and Team Dirt ran the whole way together with a final sprint leading to Dirrty Girl and Little Dirt Dawg rolling across the finish a mere 1 second ahead of me and Dirrty Feather. Our respective times of 33:27 and 33:28 were of no concern as we were all thankful to start a new tradition that everyone enjoyed. 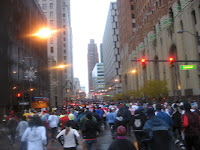 Of course the tradition was not complete without a stop @ the DSO to watch some of the parade! 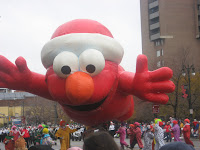 I wish I would have known. The Turkey Trot has been an annual tradition for some time...my son runs while my wife and I cheer him on. Yes, weather was ugly early but seemed to clear up later...well, at least that's what it looked like from the comfy confines of Cobo. Glad to hear you enjoyed it.