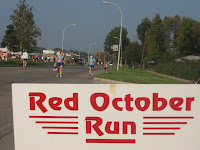 Today found Team Dirrty on the road to it's first family running event, the Red October Run. With only one baby jogger, Dirrty Girl and Little Dirt Dawg decided to run the 5k while Dirrty Feather and I were going to do the 5k walk. Pre-race activities included getting little dirt dawg a number #2 to pin on his race t, carbo load him up with a bagel, and Dirrty Girl make the comment after seeing a race walker, "You know, you should try and win the walk." To which I responded, "have you seen the stroller i am pushing your daughter in?"

With temps hovering in the high 70's and a thick air, a run or walk at a PB was highly unlikely but that did stop me from strapping on the Garmin 305 and when the gun went off, so did Team Dirrty. Soon enough, Dirrty Girl and Little Dirt Dawg were out of sight, but I focused on hunting down anyone with a yellow bib and pass them convincingly as Dirrty Feather squealed. 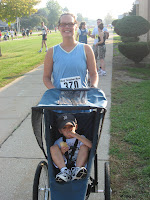 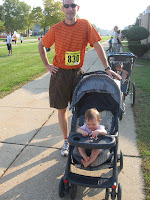 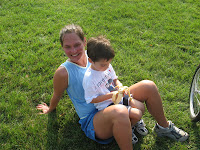 A nice little saturday morning as we basked in post race refreshments and I had to pick up a medal for my 3rd place!!
Posted by Unknown at 5:01 PM

Congrats to the whole Fam! Thats a pretty decent walk time. I don't think the WIP will be seeing those walking stats anytime soon (stroller or not).

That sounded like a great way to spend a day with your family.

I heard about you BLOG on Steve Runner, great work, keep it up.