My original plan for this race was to treat it as a fun run. Take the camera, snap some pics and enjoy a run through the D as I finished when I finished. Twinkle Toes in his first marathon had boldly made a prediction of taking a crack at 3:40 and we made the pact that if I caught up to him in the latter stages that we would run to the finish together. I really didn't think that I had it in me to run quite that fast, although a 3:40 would be a PR and my knee was actually feeling pretty good.

The first 10 miles of the race finds you running through the city to Mexicantown and then over the Ambassador Bridge into Canada, before heading back into the U.S. via the tunnel, where of course my Garmin lost its signal. 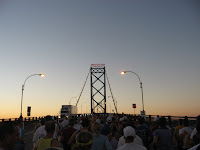 (Going up the Ambassador Bridge) 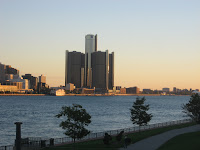 (View from across the pond in Canada) 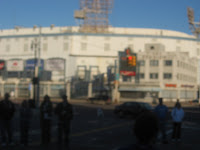 Passing the half in 1:45, I was more than elated, and of course I start running numbers through my head. If i don't fall off too badly, then I might have a new PR and Twinkle Toes who was running strong was just beginning to have some trouble with a lingering IT band. 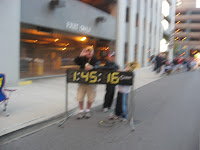 Soon enough, Twinkle Toes and I parted ways. Up ahead, I ran into and with a guy named John who was completing his 96th marathon and was going to run next year's Boston as his 100th!!!! I listened as he dispatched nuggets of wisdom that I hope will have me running for a long, long time.

A small part of me felt bad for leaving Twinkle Toes behind, but the thought of a new PR pretty much quickly erased that. Figured I could tell him I was sorry on the way home. He said he would have been pissed at me if i didn't take a stab at a PR. I just didn't establish a new PR, I dropped 11 minutes off my PR that I set earlier this spring and that is a 14 min overall improvement from the beginning of the year. Not a bad way to end the season. 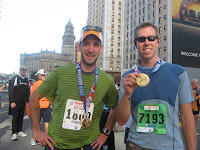 Way to rack up a PR, especially since your focus was on the 50 miler this season! Great job!

I really could have used some of your endurance when I hit mile 21...