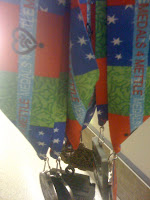 Yesterday, I had a unique opportunity to directly see the impact that the Medals 4 Mettle organization has on it's recipients. For those of you unfamiliar with the charity read below:

" In 2005, Medals4Mettle was started as a result of marathoner runners who award their finisher's medals to others who have demonstrated similar mettle, or courage. Certainly everyone cannot run a marathon, but people who are battle life-threatening illnesses and severe disabilities demonstrate mettle everyday. Marathon runners experience the cheers and support from total strangers as they run through the streets, and these same runners cheer wheelchair competitors that they may pass on the course. Medals4Mettle celebrates our collective human courage, and our innate desire to reward and support each other as we all face life's challenges."


Let's back up for a second though. About a year ago, I ran across the M4M charity via the Internet and saw that there was a Detroit chapter. My medals were just hanging there in my man cave/running room collecting dust and really served no other purpose to me than to avoid hitting them as I rummaged through for gear. Now, of course if you had asked me 5 years ago to donate my race medals, I would have told you no way! I ran "X" race, I earned that medal. Call it the preciousness of youth or simply immaturity, but I didn't see the value in donating something I felt I had earned. Forward motion and reflection left me lots of time to think about what it all means in terms of my running, those medals, etc. I will always have those memories and no longer saw any need to keep those medals. Pass it on, and let someone who is really running a much more difficult race be recognized for their efforts.

For an episode of the podcast last year, I was able to sit down with the Detroit chapter president , Joe Burns and donated all of my marathon and ultra race medals at the time. I have continued throughout the year to plug the charity and through the podcast, I have received medals from fellow runners from all across the country including one guy who was able to collect over 200 medals from a race that I have passed on to Joe. Last summer, Joe invited me and a few others to Children's Hospital in Detroit, where we met a representative and donated some medals that would then be passed out to the children. While, I was truly inspired by that opportunity to talk up the charity, yesterday's opportunity left no doubt in my mind that every runner/cyclist/triathlete who has participated in an endurance event should donate to this charity at least one medal.

University of Michigan C.S. Mott Children's Hospital yesterday provided me and several others, the opportunity to meet and present children who are participating in their own endurance event that none of them chose with some medals. These children and their parents did not choose their event. They did not choose to have a closed head injury, or seizures, or compressed vertebrae, or burns, or have their twin brother not make it through the birth process. However, in every one of those kids eyes, I saw mettle, I saw courage, and I saw an indomitable spirit that said, they are going to persevere. They were going to keep moving forward.

I hope the small token acknowledging their efforts brought a smile to their face and a reminder that they are too endurance athletes in their own right. After yesterday, I have no reason, to complain or mire in the choices I make regarding signing up for an endurance event or an injury I might incur as a result. I made that choice, these children did not.
Posted by Unknown at 9:16 PM

I've read about this group - what an awesome thing they are doing! Thanks for sharing their website and your thoughts.

beautiful blog..pls visit mine and be a follower.. thanks and God bless..

beautiful blog..pls visit mine and be a follower.. thanks and God bless..