Armed with with sweet new shiny socks, I ran the Detroit Free Press Marathon for a 5th time. This was the 32nd running of the event, and the first time that the event had sold out. The only reason I was able to run was because they opened up an additional 250 marathon slots during the expo. I entertained no time goal for the marathon other than to have a good time and snap some photos seeing as how I was coming off a "fat ass" style 50k the weekend before. 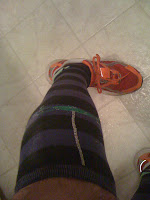 A new start/finish line had been constructed for this year. This was also the first year for wave starts. For the most part, it seemed to alleviate crowd congestion at the beginning and allow runners to get into their groove right from the start. 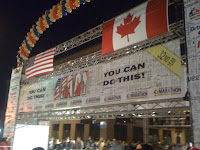 I never get tired of running up and over the Ambassador Bridge, as runners cross over from U. S. to Canadian soil. 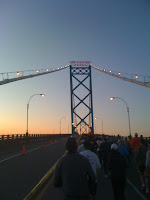 A view of the Detroit city skyline while running in Windsor. 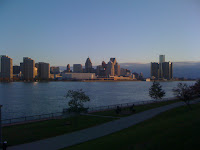 The Free Press Marathon boasts the only "underwater" mile as participants run back into the U.S. via the Windsor Tunnel. 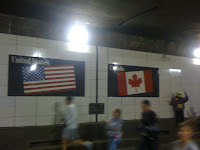 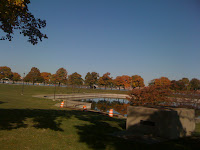 In the end, I ran it in 3 hr 47 min and had a blast with over 13,000 fellow runners. Despite the happiness I felt at how the city came together for such an event, a moment of silence/remembrance should be given for the 3 fallen runners who died during the event. We should all remember how lucky we are to be out there moving forward 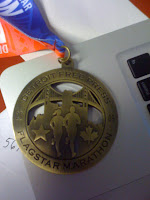 congrats on the awesome run, I love the Detroit Marathon. well done, and way to enjoy the crap out of that run.

Great pics! I wish I had more battery in my iPhone or that I had a camera with me! that course is just fantastic. I loved the rising sun while we crossed over the bridge.
Glad you could make it and that you had fun. It's incredible (to me) that you can still run a full marathon just a week after running a 50K... Impressive!
I had lots of fun for my first full last Sunday! And thanks again for your support! Your name was on my fundraising bib!