This past weekend, the U.S. Olympic Men's and Women's Team were decided in Houston. I was a bit disappointed that the United States Olympic Team had not negotiated for some live TV coverage of the event. I mean, even the New York City Marathon shows a "taped" coverage of the race. Don't you think the U.S. Olympic Marathon Trials is on another level and deserves some live TV coverage? Furthermore, Track and Field, Gymnastics, and even Swimming show qualifying heats leading up the finals so why not the marathon? I certainly would have paid a few bucks to watch a live streaming feed of the event.

Instead, like many, I was left to first follow the action on Twitter, and then set my DVR to record the event that was shown later that day on NBC.  While it was exciting to follow the updates on Twitter, the emotions displayed on TV were far more powerful.


Unlike other countries, who arbitrarily decide their marathon teams, I like the format the U.S. has chosen. Run the qualifying time needed to earn the right to toe the line on the day of the trials, and then let the chips fall where they may. In the end, there weren't any real surprises as the favorites lived up the "hype" and laid down performances that by all accounts leads me to believe that we are sending our strongest team ever to the 2012 Summer Olympics in London. 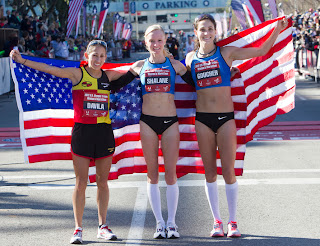 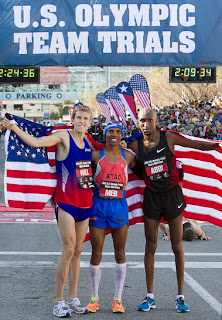