On paper, I failed 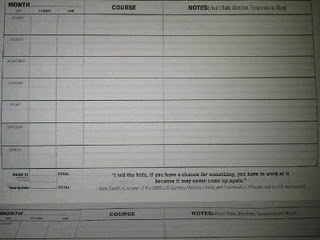 
1. Another Boston Marathon qualifier (3:15 or better)

4. Complete a duathlon or triathlon

Here are the fastest times I ran this year for each of the goals:

4. No duathlon or triathlon...

If I were to simply look at what I had written down and based my success as a runner off of that then yes, I did fail. However, as I began to ruminate on the goals written, I actually learned quite a bit and grew as a runner.

First and foremost, I tried not only one but two training plans this year. For years, I have eschewed running plans, but I thought that if I was going to try and get back to Boston, then I should try and follow a plan. In the spring, I followed Hal Higdon's Intermediate Marathon plan and even though race turned into being assaulted by aliens and a 4 hour finish, I was quite satisfied. I learned the value of scheduling runs for a week and why runs based on the pace you expect to run in the marathon are important. When fall rolled around, I jumped into the Hanson’s Marathon Plan and learned about making sure to adequately warm up before settling into race pace and the added value of speed work. Again, race day was what it was, but I came to appreciate the value that a training plan can provide.

Secondly, I made a return to the track and actually raced some 5k's. Prior to this year, I hadn't gone to the track to do any specific training since high school, and I couldn't recall the last time I raced a 5k. The anaerobic gasping of the 5k's this year brought back memories of my high school cross country days. I found myself enjoying the challenge of racing rather than dreading it after I learned that warming up slowly prepared the body for harder efforts. You can’t just hit full speed off the line without priming the engine. Racing the 5k's were a great lesson in making sure I didn't blow my wad in the first mile and translated to a solid 10k in the fall.

The most important thing I learned this year was that even though I set the bar and failed, I still grew as a runner. If I had set the bar too low and achieved the goals to early in the year, I wouldn't have given myself anything else to shoot for the rest of the year. In that, I continued to challenge myself and it made me step out of my comfort zone in regards to running. Sometimes, we have to step out our comfort zone and feel the fresh air of a challenge to be rejuvenated.
Posted by Unknown at 8:37 AM

Mike, I'd say go back to what got you to Boston before and return to that. It seems like it worked better for you than the Hanson's with the shorter long runs. Best of luck with it and in 2012!

Great post Mike, I'd say you've learned a lot this year. You did set the bar pretty high and that's what goals are for. I think if you had accomplished some or all of the goals, your level of contentment would be higher. Often it's that level of contentment that drives us to complacency. For me failure is the driving force to explore new things and push beyond the level of comfort. It's only when we stretch that envelope do we find out what we are made of.