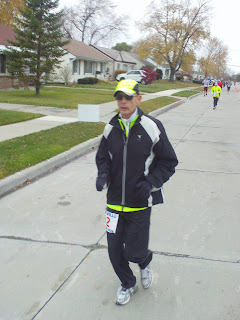 If there is one thing I love about my dad is his propensity to just put it out there. Simply put, to tell it like it is. Unabashed and with candor. To say that it has rubbed off on me is an understatement. So I was not surprised in the week leading up to the Roseville Big Bird 10k, that my dad was stating how he was feeling really good and looked to go under 60 minutes. Furthermore, he was confident that we could run down Dirrty Girl and the Ex Navy Seal and avenge the stinging defeat in the 1/2 marathon a few short weeks ago. True, his bruised foot from the hoof of a horse prior to the 1/2 marathon had healed and he no longer had any lingering effects of the cold but more importantly he had been able to string together some solid training and had been texting me all week about how well he had been feeling.


Our arrival at the community center about 90 minutes before the race was met with cold (around 40 degrees) air and a stiff wind. We hung out in the gymnasium and my dad began to lay out an ambitious BHAG for 2011, 2 marathons! His confidence was high and we chatted about potential marathons and I could tell that he really wanted to run a strong race. The goal was simple. Shoot for around 60 minutes and I would pace.

We all huddled in the car prior to the race and it was far colder than the 40 degrees that showed on the car dash.

The early miles seemed to tick off quite easily and we were just a hair over the 10 min pace at 2 miles. By this time though, Dirrty Girl had scampered off and would run an impressive and oh so close PR of 1 hr and 45 seconds.

However, just past the 3 mile mark, an old enemy coupled with the wind, clipped my dad's wings and the hope of a 60 min 10k...weather induced asthma. See the cold weather exacerbates his asthma and he has a difficult time breathing without hitting the inhaler, which of course he forgot in the car. We were reduced to a walk at certain points and he even had to put his hands in front of his mouth to try and warm the air. Nevertheless, he stayed strong and we finished just under the 1 hr 10 min mark.

I could sense the disappointment in his eyes and voice and we reviewed the race on our way home and today even over emails and texts. He stated the heart and the legs were willing, but the weather reared its head and the lungs could not keep pace. A race like yesterday forced him to re-evaluate his current fitness and program and said that maybe a fall marathon in 2011 along with some half marathons would be a more prudent and solid idea. I told him that was a great idea seeing as how it would give him an year of running under his belt before stepping up to the marathon distance.


If there is one thing about my dad I know is that you may try to clip his wings or hold him down, but somehow, someway he is gonna soar. He is a runner with goals of a marathon on the horizon. This is gonna be fun.
Posted by Unknown at 12:53 PM

That's so sweet. Your dad ROCKS!